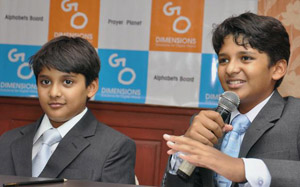 Two tech savvy brothers Shravan (10) and Sanjay Kumaran (12) are perhaps the youngest App developers and CEOs from India. Together, they have been successfully running an app developing company called Go Dimensions. Shravan is the Co-Founder and President while his brother Sanjay Kumaran is Co-Founder and CEO of the company. They are the students of Vaels Billabong High International School, Chennai. According to their parents, from the very early childhood they developed interest in computer and spent hours in searching what more to do with it which led them to developing mobile applications.

They founded Go Dimensions out of their passion in the last month of 2011 but within two months their first mobile application Catch me Cop was on display at Apple’s App Store and within next few weeks it received attention of cnet.com, one of the most popular websites for tech news, reviews and listings of popular apps.

As of now their apps have witnessed more than 10,000 downloads across the world. Some of their more popular applications include Alphabets Board (This App is for kids to Learn alphabets), Color Pallette (This App is to Learn various colors for kids) and prayer planet (the game is for religious prayers of different communities).

Catch Me Cop is a Game App which is accessible on iPhone & iPad. In this game, the whole nation is behind a convict who escapes from a prison and runs through the difficult places including Desert, forest, Beach & Maze fields. Apart from primary level, there are more levels with some more difficulties, more speed & cops.

When asked about future aspirations, Shravan and Sanjay replied that they’d prefer to focus on studies but also added that they’d love to see Go Dimensions as one of the fastest growing app developing companies focusing on creating more educational apps for kids.