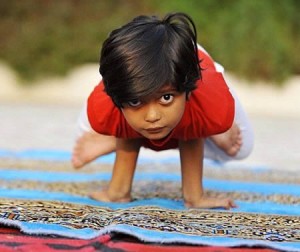 Now 8 year old, Shruti Pandey became the youngest yoga trainer in the world at the tender age of six, and for two years she has been training adults in northern India at an ashram of her 67 years old trainer Hari Chetan, who founded it some 37 years ago. She takes classes in the early morning which often comprise of 30 businessmen, teachers, housewives as well as pensioners. Her guru was surprised not only by her flexibility but also by her determination and talent, which compelled him to make her teacher of the ashram. Shruti states, “It feels good when people follow my instructions, I feel like a real teacher.”

However, Shruti is not the the only person from her family, her older brother Harsh Kumar also mastered 84 yoga positions when he was only five years old. He has already made it to the Limca Book of Records and is the source of inspiration for his younger sister Shruti. She prefers to call her brother as her grandfather, ‘I got interested in yoga after seeing my brother doing it. I tried picking it up myself but it was too hard. So I asked my parents to send me to yoga classes.’

One 90-year-old retired teacher named Swami Bhanu says “The best thing about Shruti is she tries to provide an alternative position for the complicated ones that are difficult for an older person like me to do. She’s very patient.”

People in her class are highly inspired by her courage and dedication to serve humanity. There are many who’ve been immensely benefited by her teachings. One of her regular visitors, a 48 years old businessman Lokendra Pal Singh says: “I have noticed a positive change in my life. I used to be short-tempered, but now I’m able to control my anger to quite an extent and it’s all thanks to a little six-year old.”