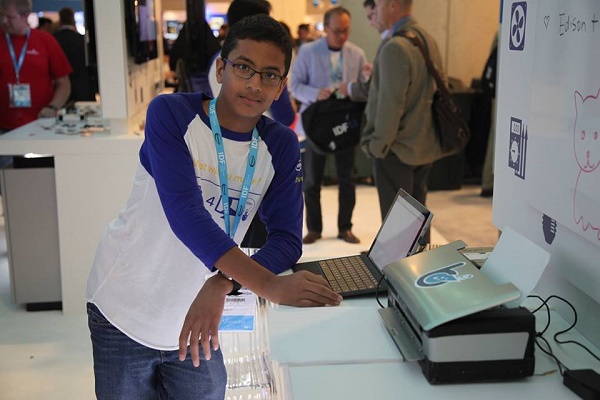 12-year-old Indian-American student from Santa Clara, California, Shubham Banerjee has invented portable and inexpensive braille printer Braigo using a Lego Mind storms EV3 kit for the visually impaired people. The printer will be retailed for $350, which is dramatically simple and affordable than other Braille printers that cost more than $2,000.

Shubham has already secured funding from Intel on November 4, 2014, at the Intel Global Capital Summit and it makes him to be the youngest person to receive thousands of dollars through venture capital investment. Banerjee had put his heart and soul to create the Lego prototype of Braigo to eradicate the most important challenge of 285 million visually impaired people living worldwide.

According to Banerjee, the printer is programmed to produce the letters A through Z in Braille in seven seconds. In his YouTube video, he has explained how to print the letter Y first and then how to combine letters to form words like cat or bat.

“From the very young age, my parents have always emphasized on helping others and doing meaningful work and that is the inspiration of inventing Braigo” – Shubham Banerjee