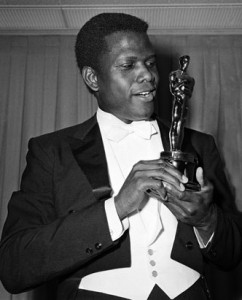 Sir Sidney Poitier, an American-Bahamian film actor, director, producer, author, and significant achiever, had no easy way to walk and accomplish his dreams. A humble journey, hard work, perseverance and determination led him to his way of his way to become one of the Greatest Male Stars of All Time.

Sidney Poitier was born on February 20, 1927 in Miami, Florida to Bahamian parents Evelyn and Reginald James Poitier. His parents were poor and would sell tomatoes and other produce from their farm on Cat Island. He had least or no formal education and had to shift to Miami when he was only 15 to live and work. After two years, he moved to New York where he lived several months as homeless, sleeping in bus terminal toilets and doing many menial jobs such as a dishwasher. While working as a dishwasher, he learnt to read newspaper from a Jewish waiter.
Poitier was a victim of racial attacks, received poor treatment and experienced that African Americans had little opportunities to live a decent life. After spending short period of time in the U.S. Army as a worker at a veteran’s hospital, he had to do some other menial jobs in Harlem on return. He tried at the American Negro Theatre but was rejected by audiences, directors and heard “Why don’t you stop wasting people’s time and go out and become a dishwasher or something?” However, unphased by criticism and hardships, Poitier promised himself to not only become a good actor but also create opportunities for African Americans.

For the next six months he devoted his maximum time to overcoming his noticeable Bahamian accent and learn performance tricks and strategies. He appeared in a leading role in the Broadway production Lysistrata and received considerably good reviews and appreciations. It was big transition in his life after which he never looked back, in 1958 he became the first ever black male actor to be nominated for a competitive Academy Award for The Defiant Ones and in 1963 he became the first black actor to win the Academy Award for Best Actor for Lilies of the Field. He was the most successful actor at the box office with three popular films: To Sir, with Love, Guess Who’s Coming to Dinner and In the Heat of the Night. Some of his best performances were in The Bedford Incident in 1965 and A Patch of Blue in 1965.

In the 1970s, Poitier started directing and producing a number of comedies including the successful Richard Pryor-Gene Wilder vehicle Stir Crazy in 1980 and Ghost Dad in 1990 and western Buck and the Preacher, and Fast Forward among some others. In 1988 he once again made his come-back appearing in Shoot to Kill in 1988, Little Nikita in 1988, Sneakers in 1992 and more. In 2001, he received a Grammy Award for Best Spoken Word Album, for his autobiographical book ‘The Measure of a Man’ and in 2002 he received an honorary Oscar for his amazing and distinct performances, his wonderful contribution, his intelligence and an impressive presence on the screen and also for the dignity and grace with which he represented the acting industry.

We suffer pain, we hang tight to hope, we nurture expectations, we are plagued occasionally by fears, we are haunted by defeats and unrealized hopes . . . The hoplessness of which I speak is not limited.

I never had an occasion to question color, therefore, I only saw myself as what I was… a human being.

In my case, the body of work stands for itself… I think my work has been representative of me as a man.

“To simply wake up every morning a better person than when I went to bed.”