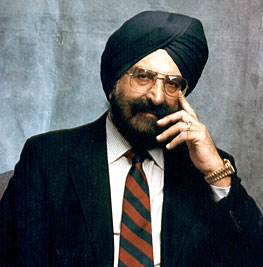 Widely acclaimed as the ‘Father of Fiber Optics’ and ‘Silicon Valley Legend’ Narinder Singh Kapany is pioneering figure of one the most significant scientific contributions to the world of physics – Fiber Optics without which other important inventions such as fiber optic communications, lasers, solar energy, biomedical instrumentation, pollution monitoring and the Internet wouldn’t have been possible. He is the person of many talents and accomplishments; he is a scientist, an entrepreneur, academic scholar, a professor, philanthropist, and artist himself.

In the early 1950s, Indian-born American physicist, Narinder Singh Kapany, on completion of his graduation in the Physics Department from Imperial College in London, developed a bundle called fibers (a name given by himself) and described the transmission of advanced bandwidths of information over great distances through a bundle of glass fibers. This groundbreaking invention lead to an exploration of an entire new field of technology called ‘fiber optics’ and helped improve the medical, entertainment, communication and other industries.

His interest in science started from the very young age when his father gave him a small Kodak camera and immediately he took interest in knowing its inner functions. He grew up with intense interest in science and technology and after completing Bachelor of Science from the University of Agra he went to Imperial College in London for further study. Before he could finish his course he received a scholarship from The Royal Society of Engineering to continue his research into fiber optics. He completed his research work successfully and returned to India. Later, he was called back to London by the University of London’s senate for his PhD program. He kept traveling and presenting his researches and became the professor at the University of Rochester, United States where he finally stayed. He has also been teaching at the Illinois Institute of Technology.

In 1960 he founded ‘Optics Technology Inc’ where he was the Chairman of the Board, President and Director of Research for long 12 years and in 1967 he successfully brought the company in public with several acquisitions and joint ventures across the United Sates. In 1973, he established his second business venture ‘Kaptron Inc.’ which he sold to AMP Incorporated.

His contributions lead him to receive numerous awards and honors including ‘The Excellence 2000 Award’ from the USA Pan-Asian American Chamber of Commerce. He was a member of the National Inventors Council and is the Fellow of scientific societies the American Association for the Advancement of Science, the Optical Society of America and the British Royal Academy of Engineering and has been recipients of several awards and recognition. He owns more than one hundred patents and has authored four books on opto-electronics and entrepreneurship and published more than 100 scientific papers. Despite his immensely important contribution he is considerably less known in comparison to his work and has been called ‘Unsung Heroes’ by Fortune Magazine.