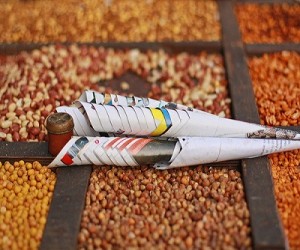 My office is almost twenty kilometers from my residence. I take two connecting buses while travelling from home to office and the same while returning home.

On my way back home, I stop a while after alighting from the bus that I take from office -have some peanuts as refreshment in between- and then take the bus which drops me near my home.
The boy selling peanuts is a thin, cheerful guy of around fifteen; shabbily dressed but polite; not foul-mouthed.

I usually hand him out a two rupee coin in return of which he gives me peanuts worth two rupee wrapped in a piece of paper and then, without any fail, some more peanuts in my hand with a smile in his face .I never bother to give any extra coin for that and usually take his generosity (considering his meager source of income) for granted.

One evening, as I was chewing peanuts, a certain bus conductor, a well-built man in his thirties, came to him and asked for peanuts worth five rupees. The bus conductor handed out a two rupee coin after receiving the peanuts.
“But the peanuts are worth five rupees as you asked for,” the boy shouted back firmly.
“Hold this two rupee coin and be quiet,” said the rude bus-conductor.
“I asked for the price of the peanuts and not your kindness,” said the boy returning the two rupee coin to the bus-conductor.
The shameless bus conductor left with the peanuts.
That evening I had the heart to offer him five rupees so as to show my concern for the loss that he had incurred.
“I wanted five rupees from him-why should you pay,” he told me smilingly.
I could not gather the courage to insist him further.

The Young Peanuts Seller taught me a lesson in dignity and self-respect: irrespective of his insufficient income and so-called low social status he would not take any rudeness, injustice lying down; nor will he accept any favour.