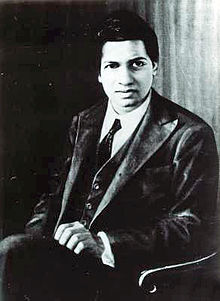 Srinivasa Ramanujan was one of the greatest Indian mathematicians who made his significant contribution the analytical theory of numbers and worked on continued fractions, elliptic functions, and infinite series without any formal education or training in mathematics. He proved himself a mathematical genius from the early childhood and had natural ability to solve complicated mathematical problems in an unconventional way. By the age of 12, he himself mastered the advanced trigonometry book written by S. L. Loney, discovered theorems and re-discovered Euler’s identity on his own. By the age of 17, he independently conducted his own mathematical research on the Euler–Mascheroni constant and Bernoulli numbers. During his short lifespan, he compiled nearly 3900 results, which were mostly identities and equations and most of them have now been proven to be accurate.

Srinivasa Ramanujan was born on 22 December, 1887 to a poor Brahmin family who lived at a small village named Erode which is about 400 km southwest of Madras (now known as Chennai). In 1889, he contracted smallpox and all his childhood he suffered from malnutrition and illness. In 1920, he ultimately died of liver infection and frequent illness; he was only 32.
His father worked as a clerk at a cloth merchant’s shop in Kumbakonam and mother was a housewife. He attended several primary schools before entering the Town High School in Kumbakonam in 1898. In 1900, he started researching on his own on geometric and arithmetic series and in 1911 he published the first of his papers in the Journal of the Indian Mathematical Society. Soon, his talent started to reveal and gain recognition. In 1913, he came in touch with the British mathematician Godfrey H. Hardy and received a special scholarship from the University of Madras and a grant from Trinity College, Cambridge. He went to England in 1914 and worked with Hardy who trained and involved him in some of his research projects. The mastery in mathematics he developed independently was unequalled; he did further research especially in the partition of numbers while living in London. His research paper published in English and European journals, and he was elected to the Royal Society of London in 1918 becoming the first Indian to receive the honour. After one year, in 1919, he returned to India and died the very next year.

In 2011, the Government of India declared Ramanujan’s birthday (22 December) to be the National Mathematics Day in recognition of his extraordinary contribution to mathematics.