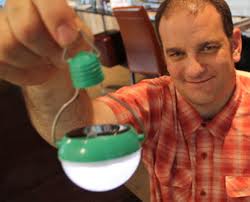 Stephen Katsaros is a social entrepreneur and innovator who enjoys developing products that could bring positive and profound change in people’s lives. He has developed several products to facilitate ski and bicycle industries but the most recent one – a solar-powered lamp named Crestone Solar Light Bulb – has drawn worldwide media attention. After researching, he found that approximately 1.3 billion people use Kerosene lamps, which are expensive and release harmful toxic fumes that pose negative consequences to health. It inspired and initiated him to develop an affordable solar light that he finally created in 2012. Crestone Solar Light Bulb is the most economical solar light that can be used for various indoor as well as outdoor lighting – for reading, cooking, camping and emergency lighting.
He founded Nokero to develop and manufacture more and more reliable, environmentally safe, reasonable-priced solar based technologies to save the world from harmful and polluting fuels.

Stephen Katsaros has already been profiled and featured by renowned media and newspaper including Wall Street Journal, Engadget, T3, Gizmodo, Discovery, Popular Science, and CNN and many others. In 1995, he was awarded a B.F. Goodrich Collegiate Inventors Award for his distinctive innovation.In 2012, Katsaros was ranked 8th among the list of 33 Idea Mensch Entrepreneurs Who Made the World a Better Place.

“Less talk, more action. So many ideas die in a boardroom, in endless meetings, or on a dry erase board. Talking through the company’s future is important, but you can’t let it drag on. Once a decision is made you’ve got to be fearless and move it forward. It may fail. If it does, you wipe off the dust and go out there and fail again. Keep going until you succeed.”- Stephen Katsaros