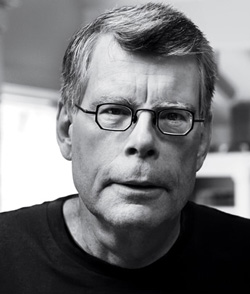 Stephen King is the most inordinately successful American author who is considered to be ‘The Master Storyteller’ of contemporary suspense, horror, fantasy and science fiction. He has written approximately 50 novels, and nearly two hundred short stories. His books have been translated into 33 different languages. Around 350 million copies of his books have been sold across the world among which several have been adapted into films, comic books and television series.

Stephen Edwin King was born in Portland, Maine on September 21 in 1947 to Donald Edwin King and Ruth Pillsbury King. His father left the family under the pretense of purchasing a pack of cigarette when he was a toddler after which his mother raised him along with his elder brother. His writing career started in 1959, when he along with his elder brother David decided to publish their own local newspaper under the name “Dave’s Rag”. In 1962, Stephen attended Lisbon High School from where he graduated in 1966.

“Books are the perfect entertainment: no commercials, no batteries, hours of enjoyment for each dollar spent. What I wonder is why everybody doesn’t carry a book around for those inevitable dead spots in life.”

“Get busy living or get busy dying.”

“Monsters are real, and ghosts are real too. They live inside us, and sometimes, they win.”

“Talent is cheaper than table salt. What separates the talented individual from the successful one is a lot of hard work.”

“A lot of us grow up and we grow out of the literal interpretation that we get when we’re children, but we bear the scars all our life. Whether they’re scars of beauty or scars of ugliness, it’s pretty much in the eye of the beholder.”

“Every book you pick up has its own lesson or lessons, and quite often the bad books have more to teach than the good ones.”

“Life is like a wheel. Sooner or later, it always come around to where you started again.”

“If you want to be a writer, you must do two things above all others: read a lot and write a lot. There’s no way around these two things that I’m aware of, no shortcut.”

“Writing isn’t about making money, getting famous, getting dates, getting laid, or making friends. In the end, it’s about enriching the lives of those who will read your work, and enriching your own life, as well. It’s about getting up, getting well, and getting over. Getting happy, okay? Getting happy.”

“Hug and kiss whoever helped you – financially, mentally, morally, emotionally – to this day. Parents, mentors, friends, teachers. If you’re too uptight to do that, at least do the old handshake thing, but I recommend a hug and a kiss. Don’t let the sun go down without saying thank you to someone, and without admitting to yourself that absolutely no one gets this far alone.”