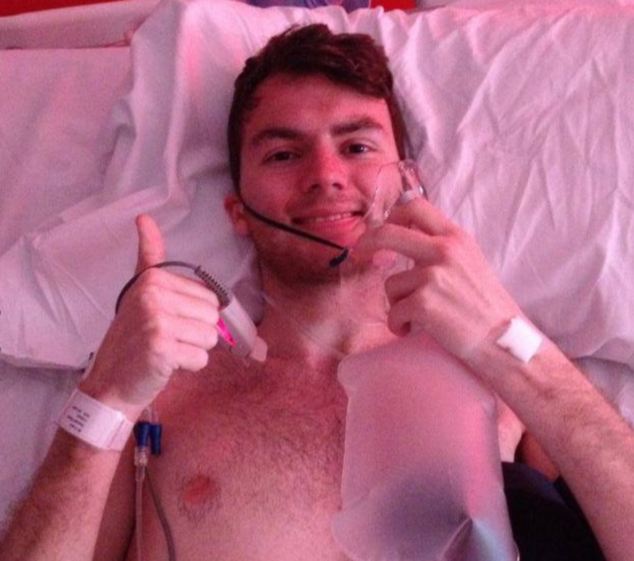 Three years back Stephen Sutton was living a pretty normal and vibrant life – playing football, rugby, table tennis, drums in a local band and working hard to accomplish his dream of becoming a doctor. But then, on a fateful day, his life came to a standstill when he was diagnosed with stage 3B colorectal cancer.

Sutton had to undergo a hemicolectomy followed by six months chemotherapy which made him extremely exhausted, and tired but despite this painful process, he continued pursuing his hobbies as much as possible to keep himself busy in something creative and pleasing. His tumor was removed successfully but it returned and spread from its original location to his lungs, groin and knee. Once again he underwent surgery to remove the lump besides 30 sessions of radiotherapy.

Pain can never keep you from what you wish to do and Stephen Sutton has learnt to stay positive and hopeful. He has stolen the joy of life and doing every bit to make the rest of his life worth living. Despite living through these painful years, he got an A* star in A level maths, A’s in AS biology, physics and chemistry and an A in self-taught AS Psychology in the final of 12th class.

Realizing the fact that he might have few day left in his hand, he made a bucket list of 46 ‘things to do’ to accomplish before his final departure. On the 13th January 2013 he began a facebook page named ‘Stephen’s Story’ where he mentioned his bucket list that included skydiving, making a bungee jump, and watching a football match at Wembley and fundraising for teenager cancer patient, and more. He has already raised £3million since the time. Many celebrities including Benedict Cumberbatch, Simon Pegg, Roger Daltry, Jimmy Carr, Jason Manford and Simon Cowell and some football players from England Football Team have helped him to raise the fund for charity.

“I don’t want to count my left days in hand because it’s pointless in measuring the worth of your life in terms of time, rather I prefer measuring how much I can achieve in this short time. My goal is to accomplish as much as possible, enjoy the life as a normal teenager.” – Stephen Sutton