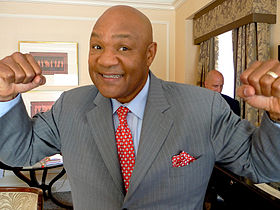 Olympic gold medalist and boxing champion George Edward Foreman is a multifaceted personality who reached the pinnacle of success in boxing as well as business world. Apart from being two-time world Heavyweight Champion, he is an Olympic gold medalist, author, speaker and an ordained Baptist minister. After retiring from professional boxing at the age 48, Foreman ventured into business and millions by selling homemade grills.

George Foreman was born on January 10, 1949 in Marshall, Texas and grew up in the Fifth Ward, Houston, Texas where his mother moved after marrying his step father J.D. Foreman, a man who later left his mother along with his six other siblings. Life became quite difficult for a single mother to handle everything alone. Foreman was strong and tough from very childhood and he would often wander in the streets of Houston, live in discarded houses, steal things from drunks, and create troubles for others. He became a known face in the streets of Houston for his size, bad habits and aggression.

From early childhood he was interested in football but later he took boxing as a career. One day, while he was he was fighting with one boy, a supervisor and boxing enthusiast Doc Broadus came to end the fight and he realized Foreman’s tremendous potential in boxing. Life for Foreman took a different turn; he started learning different boxing techniques from Broadus and he became qualified for the Olympic boxing team with just two years’ rigorous practice. He won a gold medal at the 1968 Olympic Games in Mexico City. In 1994, at age of 45, he won the Heavyweight Championship by knocking out Michael Moorer, who was 19 years his junior, and thus became the oldest Heavyweight Champion in history. Finally in 1997, he retired.

In 1995, two years before his retirement from boxing, he founded electrically-heated grill, which is also known as the George Foreman Grill. Despite a slow start, it became successful. In 2002 the company made $922 million from the product and by the end of 2003 the company managed to sell 50 million grills.

“Many people fail not so much because of their mistakes; they fail because they are afraid to try.”

“Everybody wants to be somebody. The thing you have to do is give them confidence they can. You have to give a kid a dream.”

“I’ve wanted to be in the winner’s circle all my life. I’m so excited about this. I’m looking for big things to happen.”

“That’s my gift. I let that negativity roll off me like water off a duck’s back. If it’s not positive, I didn’t hear it. If you can overcome that, fights are easy.”

“I want to keep fighting because it is the only thing that keeps me out of the hamburger joints. If I don’t fight, I’ll eat this planet.”

“Put your name on something, it better be the best, … You only get one shot.”

“Boxing is like jazz. The better it is, the less people appreciate it.”

“Without appreciation and respect for other people, true leadership becomes ineffective, if not impossible.”

“To succeed in business, you need somebody in your corner who cares enough to challenge you and is courageous enough to tell you the truth, especially when the pressure is on.”

“In your business or in your close relationships, if you want people to perform Herculean feats on your behalf, they must know that you care about them.”

“You never help others by allowing them to getaway with giving less than their best efforts.”

“The world is full of people who want to play it safe, people who have tremendous potential but never use it. Somewhere deep inside them, they know that they could do more in life, be more, and have more — if only they were willing to take a few risks.”