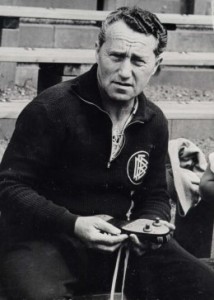 Adolf Dassler was the founder of the World’s second biggest sportswear manufacturing company Adidas. His father Christoph worked in a shoe factory and mother ran a laundry service. His elder brother Rudolf Dassler would manufacture the handmade spikes for the track shoes in their blacksmith’s shop and later founded the multinational company of athletic shoes and sportswear PUMA.
Adolf Dassler was also trained as a cobbler and from very early age loved experimenting with innovative designs and ideas. At the age of 20, he began designing and producing soccer, tennis and athletic shoes by taking suggestions from trainers, doctors, coaches and other athletes. His brand earned international attention after the 1936 Summer Olympics in Berlin, when Jesse Owens won 4 gold medals wearing his brand.

In 1948, after several years of conflict, both brother finally decided to split and his older brother Rudolf left the company and founded another big brand Puma. In 1949, he designed shoes with the company trademark of three black stripes modeled with rubber studs. The brand reputation later strengthened with its use by several Olympic medal winners, world record makers and football players. In recognition of his work he was inducted in the Hall of Fame. It is said that Adolf Dassler, along with his team of designers and developers acquires over 700 patents.

“You need good thinkers around you. Without them, you will go broke.”

“It really wasn’t a job to me. It was more of a need, desire and shear love of helping athletes.”

“I grew up in a working class family. We weren’t poor, but we were awful close.”

“Business is never easy, even when working with family.”

“Without my brothers, I would not have been as successful as I was.”

“People may call me the father of the modern sports industry, but all I am is an athlete that saw a benefit to improving equipment.”