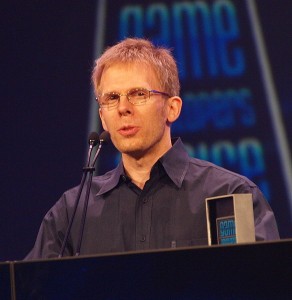 John D. Carmack II, an American game programmer as well as co-founder of id Software, is widely known for his creativity in 3D graphics and being the creator of some of the popular computer games including Wolfenstein 3D, Doom, Commander Keen, Quake, Rage, and many more. Carmack is also a rocketry enthusiast and the founder and lead engineer of Armadillo Aerospace.
Born on August 20, 1970, Carmack was the son of a local news reporter Stan Carmack and spent his early years at the Kansas City Metropolitan Area. Acording to David Kushner’s Masters of Doom, at the age of 14, Carmack was caught red handed breaking into a school and stealing Apple II computers. The robbery was meant for helping a group of students who desperately wanted the computers. He was reportedly arrested and sent for psychiatric treatment and sentenced to a year in a juvenile home. Later, he attended the University of Missouri–Kansas City but dropped out to work as a freelance programmer. Prior to founding id Software, he worked for Softdisk, a computer company in Shreveport, Louisiana.

He is the primary figure behind popularizing and creating the use of some unique and useful techniques in computer graphics that includes raycasting for Hovertank 3-D, Catacomb 3-D, “adaptive tile refresh” for Commander Keen, Wolfenstein 3-D, binary space partitioning for Doom, surface caching for Quake, Carmack’s Reverse for Doom 3, as well as MegaTexture technology for Enemy Territory: Quake Wars.

In 2002, MITTechnology Review, TR100 included him among top 100 innovators under the age of 35. In 2008, he was honored at the 59th Annual Technology & Engineering Emmy Awards for his contributions in 3D technology and was honored by the National Academy of Television Arts & Sciences. In 2010, Game Developers Association honored him with the Lifetime Achievement award.

Carmack is a self-taught aerospace engineer and the lead engineer of Armadillo Aerospace which he founded in 2000. Moreover, advocates of open source software, and voices his opposition aganist software patents.

“Focused, hard work is the real key to success. Keep your eyes on the goal, and just keep taking the next step towards completing it. If you aren’t sure which way to do something, do it both ways and see which works better.”

“Programming is not a zero-sum game. Teaching something to a fellow programmer doesn’t take it away from you. I’m happy to share what I can, because I’m in it for the love of programming.”

“Focus is a matter of deciding what things you’re not going to do.”