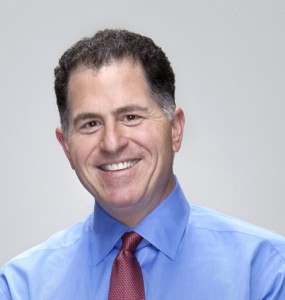 Michael Dell, a renowned entrepreneur, author and the founder as well as the chief executive officer of Dell Inc, was born on 23rd February 1965 in Houston, Texas. His father was a stockbroker and an orthodontist and mother was a money manager. Two things inspired Dell more than anything; first came his parents and the second was business. Dell once confessed that he had crave for computers as well as stock market. At the early age of eight, he sat for a high school equivalency exam in hope to venture into business. He did his schooling from Herod Elementary School in Houston, Texas

From teenage, Dell kept doing several part time jobs from where he would collect money to invest in precious metal and stocks business. At the age of 12, he operated a mail-order trading business for stamps and baseball cards and earned $2,000. At the age f 14 he received his first computer Apple II and studied details on how it worked and developed a knack for computers. During his studies at Memorial High School, he worked part time as a marketing executive for the Houston Post and learnt some precious selling strategies. He used to make cold calls and learned that the newlywed couples or new comers in the area were easy-to-convert prospects. In a year, Dell managed to earn $18,000; back then it was quite an amount.

When Dell was at the University of Texas, in 1984, he began his computer company “PCs Limited” with his pocket money $1000. Hi family financed him with $300,000 and Dell started assembling computer and selling with a year free service warranty. His dedication to service got him hundreds of satisfied customers. The next, Dell took a big decision; he quit his studies from the university to devote whole time in business and started selling PC, kits and add-on components. After that company was renamed with Dell Computer Corporation and moved in North Austin. In 1992, Fortune Magazine kept his company among top 500 companies and with that he became the youngest CEO at the age of 27. After 4 years in 1996, Dell began selling computer online and launched a server and the growth doubled within years and became world’s largest PC manufacturer.

In 2004, his position as CEO was taken over by Kevin B. Rollins but after 3 years once again he became the president and CEO of the company.

Dell published his first autobiographical book “Direct From Dell: Strategies That Revolutionized an Industry” in 1999 with a detailed description of his childhood, his mistakes and finally lessons through which he finally found the company Dell. Dell Computer Corporation became Dell Inc. which is now in business of offering personal devices as well as home entertainment.

In 1999, Michael, along with Susan Dell, founded the Michael and Susan Dell Foundation through which they serve for the betterment of children and has already contributed over $530 million for developing urban communities in the United States and India by the year of 2010.

He has also donated $65 million to the Dell Pediatric Research Institute, the Michael & Susan Dell Center for Advancement of Healthy Living, and the Dell Children’s Medical Center. All three health organizations are associated with the University of Texas where he studied.

In 1989, at the age of 24, Dell got the “Entrepreneur of the Year” given by Inc. magazine. Worth magazine honored him with the “Top CEO in American Business”

In 2002, University of Limerick awarded Dell with an Honorary Doctorate in Economic Science for his generous investment in Ireland and the local community for educational initiatives

Financial World, Industry Week and Chief Executive Magazines honored him with the “CEO of the Year”
He has been a member of the U.S. President’s Council of Advisors on Science and Technology besides working on the executive committee of the International Business Council, the governing board of the Indian School of Business in Hyderabad, India, the Foundation Board of the World Economic Forum and the U.S. Business Council.