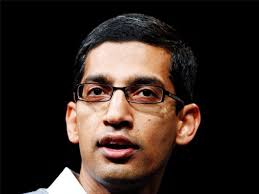 Google’s senior vice president for Android, Chrome and Apps, Sundar Pichai is known to be among the top three Indians in the team of CEO Larry Page. He has been the primary figure behind Google’s most innovative efforts including Google Drive, Google Toolbar, iGoogle, Desktop Search, Gadgets, Google Chrome, Google Pack, and Gears.

On completion his B.Tech from the Indian Institute of Technology Kharagpur (where he was awarded an Institute Silver Medal), he received an M.S. from Stanford University and an MBA from the Wharton School, where he was also named a Siebel Scholar and a Palmer Scholar. He has worked at Applied Materials holding various engineering and product management positions and at McKinsey & Company as the management consultant for a variety of software and semiconductor clients and in 2004 he joined Google.