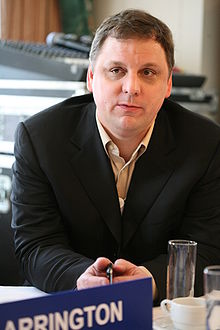 J. Michael Arrington is an American serial entrepreneur, former lawyer and the founder as well as earlier co-editor of TechCrunch, a San Francisco-based web company that offers news and analysis on the ongoing events in the tech world and features start-up companies and budding entrepreneurs.

Michael Arrington was born and grew up in Huntington Beach, California and Surrey, England. In 1992, he completed his BA in Economics from Claremont McKenna College and then attended Stanford Law School from where he graduated in 1995. On completion of law degree, he continued his practice as a corporate as well as securities lawyer at O’Melveny & Myers and Wilson Sonsini Goodrich & Rosati. His clients’ list varied from start-ups to reputed companies like Apple, Netscape, Pixar, and some investment banks.
In 1999, Arrington left his law practice and join RealNames Corporation, an online navigation system provider for Internet users, as VP of Business Development and General Counsel but company failed completely after raising funds of $100M. In 2000, he co-founded an online payments company named Achex that was taken over by a global payment processing company First Data Corp for $32 million. He has also co-founded Zip.ca and Pool.com and founded CrunchFund, a venture capital firm, along with Patrick Gallaghar and M.G. Siegler in 2011.

He was called to be one of the most powerful people on the Internet by reputed magazines such as Wired and Forbes, and was also chosen as one of the most influential people in the world by TIME in 2008.