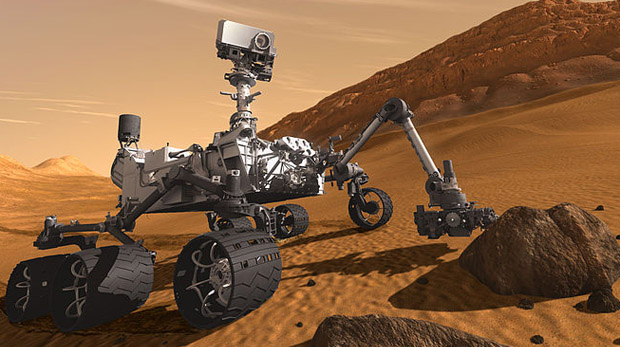 NASA’s Curiosity rover has created history by successfully touching the land of Mars on 6 August, 2012. It was a very emotional moment that overwhelmed the campus of the Jet Propulsion Laboratory in La Cañada Flintridge as well as the engineers inside the mission’s control room. All applauded, cried, laughed and hugged each other in extreme joy. An engineer on Curiosity’s entry, Al Chen said that it was the most amazing moment for which space scientists have been waiting for 10 years.

On successful landing, the Curiosity craft has sent out a series of photographs of how it landed on the surface of Gale Crater near the equator of Mars to Earth. 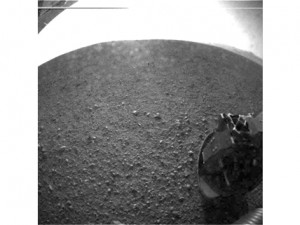 One of the first Images of Mars taken by Curiosity

The Curiosity rover is a $2.6 billion one-ton and six-wheeled nuclear-powered Mars rover that is the part of NASA’s Mars Science Laboratory mission. MSL spacecraft is the size of a small car outfitted with the most advanced payload of technical gear and a set of machineries — 17 cameras, radiation detector and laser. On November 2011 Curiosity was launched and after 8 months of rigorous travelling and covering over 350 million km it has successfully landed on Aeolis Palus in Gale Crater on 6 August 2012. According to experts, it is NASA’s most remarkable technological accomplishment in decades; Curiosity now is on the way of starting its 98-week mission to explore the most ambitious mystery about how Mars has evolved, how a hollow may could have been filled with water billions of years ago, how frequently its climate become rude, how long wet weather lasts and more extraordinary voluminous data about Mars.

The landing target of Curiosity was chosen near the Martian equator’s Gale Crater, to dig into the geological evidence of past water. It has landed on a 5.5km high crest in the centre of the crater that is plain with clay deposits and very near from the Mount Sharp.

The leader of NASA’s Mars Exploration Program Michael Meyer said, “Mars looks like it has been habitable…but you need to go and look…. And Curiosity is the rover that is able to do that.”

The Purpose of Curiosity rover

Curiosity is expected to assist scientists to compile incredible scientific data with evidence, in deep detail space exploration and to revolutionize the complete understanding of Mars- if there is any possibility of fostering life on the red planet or it was ever hospitable for life in microbial form.
NASA’s associate administrator John Grunsfeld said “Curiosity has captured the imagination of the world…we’re about to do something that I think is just huge for humankind.”