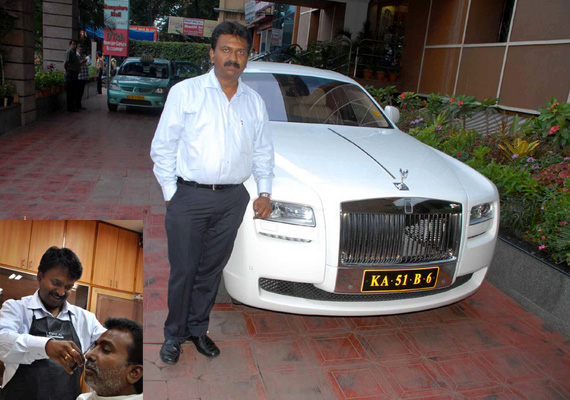 Anything can be accomplished if you set your mind to it. You can be anything if you ‘dare to be’ – dare to be patient when time seems to be running out of your hand, dare to be tougher when adversity strikes, dare to be persistent when you’re completely exhausted, and dare to keep going when the road in front of you seems to be ending. Successful people aren’t extraordinary; it is their courage, determination, positive attitude and desire to succeed make them stand out of the crowd.

Whether you want to have a nice haircut done for a reasonable price or want to travel in a luxury car, Ramesh Babu is the man to satisfy you with both. He owns over a hundred luxury cars including BMW, Rolls Royce, Mercedes, and many more.
Now the question comes in our mind is if it is possible for a barber to own a fleet of some of the world’s costliest cars? How did this barber make it?
Ramesh’s father died leaving a small barbershop (that all he owned) when Ramesh was a young boy and still studying. His mother leased the shop for Rs. 5 a day which was least to fulfill their domestic requirements or bringing up three kids for his mother. His uncle came to help them by training Ramesh for the profession. On completion of his higher secondary from St Joseph’s College of Commerce, in 1991 he decided to run his father’s salon. Soon his salon became a trendy styling outlet for teenagers. Within next three years, he earned enough to buy a Maruti Omni with his savings and leased his car to Intel Bangalore on the advice of one of his mother’s employers. The decision of renting out his car changed his life. By 2004 he had six cars to engage in the business. Later, on losing his assignment in Intel, he invested in expensive luxury cars like Mercedes E Class sedan to tap high-end clients. When his business grew three more Mercedes and four BMWs were included.

He gives credit of his success to mother who struggled so hard to provide the best possible environment to her kids upon his father’s death. He believes relentless hard work, perseverance and faith in self are most significant ingredients for good luck and success.