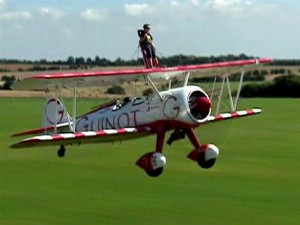 In 2009, the 8 year old Tiger Brewer set the world record of becoming the world’s youngest wing-walker by flying at 100mph over Rendcomb Airfield in Gloucestershire on his grandfather Vic Norman’s biplane. Two individual witnesses watched the daring but wonderful flight at Rendcomb Airfield, Cirencester, in Gloucestershire. His remarkable achievement was marked by Cirencester Mayor Geoffrey Adams by giving him a certificate. Previously the record was held by the son of Pink Floyd drummer Nick Mason, Guy Mason at the age of 11 in 2001.