While extreme poverty is taking as a toll on Indian economy and is leading to miserable living conditions, two young men dared to sacrifice their luxurious upbringings and sophisticated lifestyle for some days to live on Rs. 26 a day in rural India. 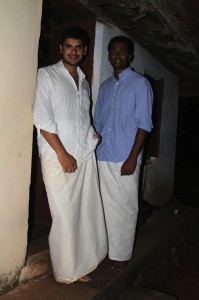 Tushar, the son of a police officer in Haryana, who completed his studies from the University of Pennsylvania and worked for three years as an investment banker in the US as well as Singapore. On the other hand, Matt, who studied at MIT became friends while working in the UID Project in Bengaluru. They shared the same flat and became close friends. The idea of simple living for themselves crossed their mind when they returned India with a genuine desire to eliminate some of the daily-life issues including poverty. In order to experience the life of an average Indian, they decided to live of their lives.

After counting that India’s Mean National Income was just Rs. 4,500 a month, which stood at Rs. 150 per day, they moved on to a considerably smaller dwelling and planed their daily lives in a way they do not extend the limited money. First they decided to spend Rs. 100 a day but realizing that it would be a living of an average Indian’s life, because seventy-five per cent Indians live on less than this average. The next, they decided to go to Matt’s ancestral village Karucachal in Kerala; and considerably cut their budget to just Rs.26 day as it was the standard poverty line decided by the government of India. In food, they found soy nuggets, Parle G biscuits and a dessert of fried banana biscuits to be reasonable as well as high on protein for each day. They also calculated that traveling on bus was affordable till five kilometers a day and only six hours of electricity which they mostly used to charge their computers and mobiles and not for light or fan. Among some other necessary goods they used included Lifebuoy soap, which is cheap, cut it into two pieces to make it last longer. They could not communicate through Internet or mobile as their limited budget did not permit them. Their budget did not cover the cost of falling ill; had they fallen, it would have been a disastrous.

Tushar and Matt’s two months long concise experience with poverty made them realize how miserable was the living conditions of a common citizen in India. They also came to the conclusion that true material possessions did not ensure a happy life; however they question, “Are they destined to be poor with the rich and the richest people around? Why are they destined to live on the edge of death while the rich spend excessive money on their luxurious or unnecessary things?”

Matt concluded by posing a question to ourselves, “Doesn’t empathy matter in democracy. If we don’t assist them for better prospects, India would be far from an ideal democratic nations.”