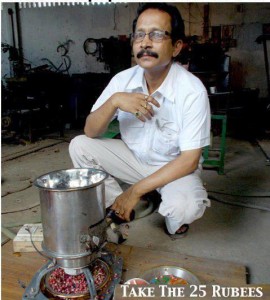 Uddhab Bharali is an Indian serial innovator, scientist as well as social entrepreneur. He has developed more than eighty-five engineering devices for different purposes – thirteen for commercial applications and others for serving individual requirements especially farmers and small scale industries. Far from the glamour, opportunities and sophisticated laboratories of big cities, he has established his own small research workshop in his hometown of North Lakhimpur, which is on the banks of the Brahmaputra river and in the foothills of the Himalayas, where he also helps local communities as well as small factories to resolve their technological requirements. Bharali has devoted most of his inventions to social causes. He also gives away his inventions to the people who cannot afford to buy one from market. Some of his award-winning designs include the cement brick making machine, the areca nut peeler, mini-CTC plant for small tea growers, cassava peeler and the popular ‘pomegranate de-seeder’, which has become very popular across the United States, Turkey and some European countries. He has been nominated by The US-based National Aeronautics and Space Administration (NASA) for its prestigious NASA Technology Award.

Uddhab Bharali aspires to establish an unconventional orphanage in his hometown to produce technical experts for which he himself has designed the training module for empowering orphans with the required technical knowledge. He also wishes to create an industrial village equipped with the facility of a multi-specialty skill development centre and wants senior citizens to become self-reliant with scientific skills.

Bharali was born in a middle class family in North Lakhimpur District of Assam and finished schooling from Lakhimpur. From the early childhood, he had passion for designing and developing machines and with the intent he took admission in the Jorhat Engineering College but had to drop out only after three months because of the local Agitation and conflicts. After a while, he took admission in the Institute of Engineers-India Madras, in Chennai for the same course but unfortunately he couldn’t complete due to the sudden demise of his father.

Apart from taking responsibility of his family, Bharali was supposed to pay back his father’s neck-deep debts. However, he somehow managed to join a polythene film making industry in 1988 to serve the requirements of the surrounding tea estates. Later, he developed his own polythene making machine at a cost of sixty seven thousand rupees. It was the time when “Polythene Making Machine” would cost around Rs. 4 lakh (about $8000). Bharali’s success was a big relief to himself that initiated him to develop more machines.

His next invention the Pomegranate De Seeder deseeds about 50-55 kg of pomegranates within an hour. The machine has been very successful and exported to foreign countries including Turkey and the U.S. He’s also developed an areca nut peeling machine that has the capacity to peel 100-120 nuts in a minute. His other inventions include: A portable electric machine named the Cassava Peeler to process up to 5 kg of cassava per minute; the Bamboo Splitter that is useful in splitting, sizing and polishing; the Garlic Peeling Mchine, Remi Recortication Machine, Paddy Thresher, Tobacco Leaf Cutter, Brass Utensil Polisher, Cane Stripper, Mechanised Weeding Machine, Jatropha De-seeder, Passion Fruit Juice Extractor, Trench Digger and a Chopper for cattle and fisheries feed. He has also developed a stevia pulveriser & passion fruit gel extractor for the North Eastern Region Community Resource Management Project.