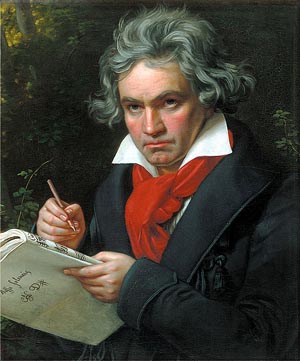 Ludwig van Beethoven, a German composer of classical music, is widely famous and considered to be one of supreme composers who played a crucial role in the transition of classical to romantic music.
Beethoven was criticized for handling the violin awkwardly. Even his teachers called him “hopeless as a composer.” His miseries never ended till he finally died: At the pinnacle of his career, Beethoven completely lost his hearing and yet he managed to write five of his greatest symphonies. His explorative music was also criticized for being unconventional and utterly new. He never got what he truly deserved nor did people realize that he was a composer of extraordinary genius and versatility and his distinct ideas gave a brand new dimension to the conventional music. He would say, “I always have a picture in my mind when composing, and follow its lines.” His explorative nature caused separation with his classical teachers like Haydn and Salieri. His strict disciplined father would beat him fiercely on trivial mistakes. However, he remain unmoved by the odds and kept believing in his own compositions. He never gave up and succeeded.

“Every day is lost in which we do not learn something useful. Man has no nobler or more valuable possession than time; therefore never put off till tomorrow what you can do today.”

“The world must give one recognition,–it is not always unjust. I care nothing for it because I have a higher goal.”

“This is the mark of distinction of a truly admirable man: steadfastness in times of trouble.”
“Follow the advice of others only in the rarest cases.”

“Kings and Princes can create professors and councillors, and confer orders and decorations; but they can not create great men, spirits that rise above the earthly rabble; these they can not create, and therefore they are to be respected.”