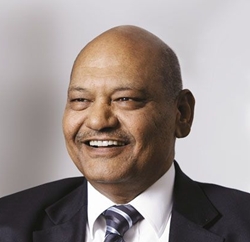 Indian billionaire businessman Anil Agarwal, the founder as well as Executive Chairman of the worldwide metals and mining company Vedanta Resources Corporation, started his humble journey from his birth place Patna, Bihar. He was born to a middle class business family and his father would make aluminium conductors. In his childhood, he would often make visits to the river Ganges and it was here, as he says, he found his passion for nature.
On completion of school studies from Miller High School, at the age 19, he came to Mumbai and started India’s first copper smelter in Tuticorin. Soon, Anil became one of the biggest metal-scrape dealers in Mumbai and started expanding his business by acquiring small companies.

In 1976, he founded Vedanta Resources that evolved as one of the largest mining and metals companies in India. Headquartered in London, the company deals in copper, aluminium, zinc, lead and iron ore and has presence in several countries including India, Zambia, South Africa, Australia and Ireland.

In 2003, Vedanta became the first ever Indian company to be chosen in the primary listing on London Stock exchange where it raised about $876 million through an Initial Public Offering. In 2007 the company was listed on NYSE (New York Exchange Stock). In 2012, Anil was ranked at number 314 in the list of Forbes billionaires with and estimated worth of $3.5 billion.

Recently, Anil Agarwal revealed that he’d be pledging about three-fourths of his fortune to philanthropy. In an interview to Samachar.com, Anil said, “Wealth is like water. No matter how much of it you try to hold in your hands, some of it will always flow out. You can hold only as much as your hands permit…..the lesson learnt is, there is no point making an illusive effort to cling to all of your wealth”

Anil currently lives in London along with his wife Kiran Agarwal and son Agnivesh and daughter Priya.