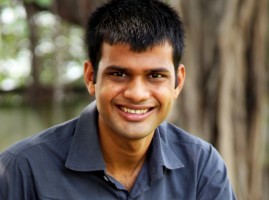 Vicky Roy has taken his street dreams to the pinnacle of its reality through the trials and tribulations of being a dhaba-boy and a coolie and fighting against the pain and pathos of grinding poverty, literally with no materialistic possessions except for irresistible aspiration, relentless hard work and determination to live a better life with bright future prospects. In spite of having to face battered circumstances that punctuated and paused his life, Vicky continues to inspire thousands of hopeless street-kids to take on their street dreams by overcoming every obstacle in their lives. Today, at the age of 25, he is an accomplished photographer.

Despite being born to appallingly poor parents in Purulia district of West Bengal, he dreamt of living a better life with better opportunities. In pursuit of his dream, at the tender age of 13, Vicky ran away from home and set off to Delhi with 800 rupees that his mother had given him to buy cement for the ongoing construction work in the house. Reality was far cruel and tough than his previous life in the claustrophobic town and he found himself to be in the midst of nowhere. Instead of returning he started his life as a rag picker rummaging through the mountains of garbage and dragging out the damaged plastic products. But very soon he faced the troubles against the local ruffians who started harassing him and snatching his earnings. Disappointed and frustrated, he took up a job as a dish washer at a local café where he worked throughout the day only for 50 rupees and spent days either without food or having guests’ leftovers. It continued until a gentle lady took pity on him and gave him the address of a children’s NGO the Salam Baalak Trust (SBT), which would take care of deprived and abandoned kids. Finally, he found a secured shelter and foods. Apart from attending the school, he would take care of the NGO’s young boys and help them with their homework.

His passion and dream emerged in 2004 while serving as an assistant to a British photographer documenting the atrocious lives of Delhi’s street kids. During the time he learnt several tricks of fine photography besides fixing the tripod for photographer, loading camera rolls, and arranging the boisterous street-kids together for a superior photo pose, and travelling through the streets of Delhi. Soon Vicky picked up photography as his profession. Street life and street kids became his favorite themes. His 25-odd photographs were selected by The India Habitat Gallery in New Delhi and titled it ‘Street Dreams’ and was sponsored by the British High Commission and the UK’s Department for International Development (DFID). He could sell seven photos at the exhibition, each for Rs 10,000 from which he purchased a digital camera for better photography and is now preparing for his second exhibition entitled ‘The Widows of India’.