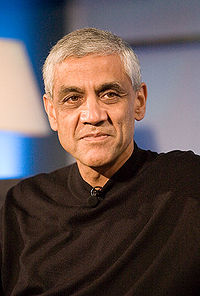 Vinod Khosla is an Indian-born American venture capitalist who is widely known as the founding Chief Executive Officer of Sun Microsystems, where he initiated the open systems and commercial RISC processors. In 2010, Sun Microsystems was acquired by Oracle. He also runs a California-based venture firm Khosla Ventures (founded in 2004) that invests in infotech and clean technology startups.

Vinod Khosla was born on 28 January 1955 to an Indian Army officer and spent most of his childhood in New Delhi. At the age 14, Vinod came to know about the Intel in one of the issues of The Electronic Engineering Times and resolved to pursue a career in technology. He completed his B.T. in Electrical Engineering from Indian Institute of Technology, Delhi and an Masters in Biomedical Engineering from Carnegie Mellon University and then MBA from Stanford Graduate School of Business in 1980. On completion of studies, he served at the electronic design automation company company Daisy Systems. In 1982, he teamed up with his Stanford classmates Andy Bechtolsheim, Scott McNealy, and computer science graduate student Bill Joy from UC Berkeley, and together they founded Sun Microsystems. After two years, in 1984, he left the company and became a venture capitalist. In 1986, Vinod joined Kleiner Perkins Caufield & Byers as a general partner and soon became a known face in venture capital world. Vinod has also invested in SKS Microfinance Limited, which provides financial support to the poor people of India. In addition, he is also the member on the boards of Metricstream, Agami, eASIC, Indian School of Business, Infinera, Spatial Photonics, Kovio, Xsigo and Zettacore.

Vinod Khosla is widely known for his witty comments, Once he said, “If it doesn’t scale, it doesn’t matter. Most of what we talk about today—hybrid, biodiesel, ethanol, solar photovoltaics, geothermal—I believe are irrelevant to the scale of the problem.” When he was asked about failure, he said “Freedom to fail is a key ingredient in success. Try and fail, but do not fail to try. Every disadvantage in India is an opportunity to do something big”

According to Forbes Magazine, as of March 2012, his net worth stands at $1.3 billion U.S. dollars.