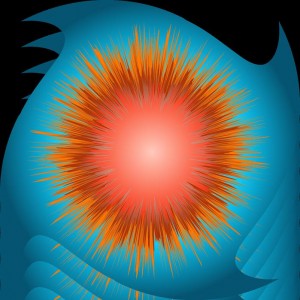 There lived, in the serene mountains, a master sculptor. He was respected in the village at the foothills, for he had the skill to carve beautiful and delicate objects even in the smallest pebbles. For days on end he would disappear in the hills and then suddenly some shepherd or a lad from the village would discover him with his new creation.

The sculptor was an old man with hardly any belongings. Without the attachment of family and relatives he was always engrossed in his work. He played with kids from the village during his short stays. As he was a calm and jolly fellow, any family would merrily feed him.

From among the few kids that the sculptor played with, a teenager became sceptical, doubting his skill. And one day he openly declared that the sculptures were stolen ones. The sculptor replied, with a smile, that the allegation was false and he was ready to prove so. The young arrogant boy agreed to test him.

The next morning, the boy set off with the old man for the hills. The boy kept arguing on the way that it was impossible to create such beautiful sculptures by staying in such a dirty hilly terrain. The old man was silent all the way up. When they reached the top of the hill, the sculptor went out looking for rocks to carve. The tired boy had his lunch and went off to sleep. Within a matter of few hours the master returned with the most delicate piece of art the boy had ever seen. The annoyed boy decided that he won’t sleep the next day and keep a close watch on the old man.

The boy woke up the next day to the sound of the sculptor grinding his tools. Keen on knowing how the old sculptor created his masterpieces, he followed him everywhere. The old man went on creating wonderful pieces of art spontaneously. The sculptor appeared to the boy to be living in a different plane of thought. He could see uncovered art even in the most ordinary things.

After nearly being starved to death, by following the sculptor for over a fortnight, the boy one day pleaded to the sculptor to forgive him and tell him the secret behind his brilliance. The boy asked the sculptor about his ability to see the exquisite in the ordinary and what was it that inspired him. To which the sculptor replied, “I sharpen my tools every day. That is all within my reach. That which is waiting to be expressed then plays its part.” The boy understood the message and returned home a bit wiser.

Are you waiting to get inspired? Doesn’t your life inspire you? Aren’t you breathing without any effort on your part? Doesn’t your body function so well without you understanding its complicated working? There is so much within ourselves we are not aware of and we get bored easily, constantly in the search of inspiration.

Inspiration is only to be found within oneself. That which comes from without is like a visitor with a short stay.