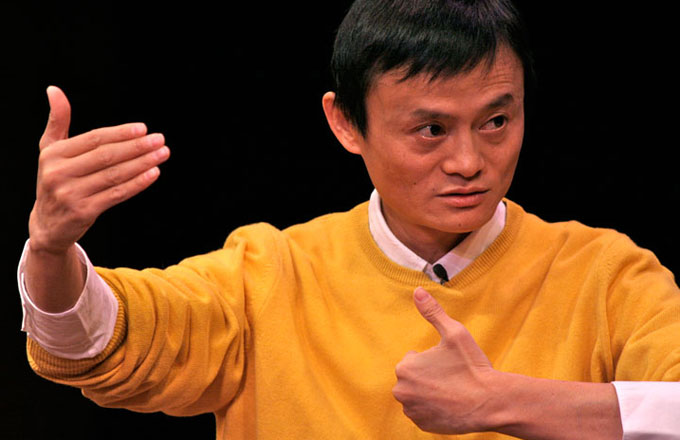 Once rejected by KFC and several other companies in his hometown of Hangzhou in east China, Jack Ma did not give up on himself. His rags-to-riches story is perhaps of one of the most spectacular ones of our time.
Born in 1964 as Ma Yun, Ma grew up in a very hostile environment. His parents performed a kind of musical storytelling that was banned during China’s Cultural Revolution that lasted till 1976.
At the age 12, Ma developed passion for English and would cycle everyday for 45 minutes to reach Hangzhou’s main hotel and speak with foreign tourists. His delicately followed this routine for the next 9 years until he became proficient in English.

Interacting with hundreds of foreign nationals changed his life. Ma realized that what the tourists told him was quite different from what he had learned in school or heard from his parents.

After failing national college entrance exams for two consecutive times, Ma enrolled at, in his words, the worst college of Hangzhou and graduated in 1988. He then taught English at a local college for 5 years and earned about $15 per month. On a trip to the United States in 1995, he was introduced to the Internet. He returned home set up a listing site that he later sold to the government. After working in Beijing for a government-owned Internet firm, Ma returned home to Hangzhou to pursue his dream.

He founded Alibaba with the help of more than a dozen friends who helped him collect about $60,000 as seed money. What happened next is a history. In coming years, Alibaba became the most popular destination for online shopping. Last year, the transactions on its online sites crossed $248 billion mark, more than those of eBay and Amazon.com combined. Alibaba has become one of the most valuable tech companies in the world after raising $25 billion from its U.S. IPO. As of September 2014, Alibaba’s market stands at US$231 billion. Jack Ma’s personal net worth is $21,8 billion which makes him China’s richest man.

Following are some of Jack Ma’s notable entrepreneurship quotes and pieces of advice for entrepreneurs and success seekers.

1. Giving up is not an Option

“Today is cruel. Tomorrow is crueler. And the day after tomorrow is beautiful.”

“If you don’t give up, you still have a chance. And, when you are small, you have to be very focused and rely on your brain, not your strength.”

“We will make it because we are young and we will never, never give up.”

“If we are a good team and known what we want to do, one of us can defeat ten of them.”

3. Failure is the Stepping Stone

“It doesn’t matter if I failed. At least I passed the concept on to others. Even if I don’t succeed, someone will succeed.”

“If we go to work at 8 a.m. and go home at 5 p.m., this is not a high-tech company and Alibaba will never be successful. If we have that kind of 8-to-5 spirit, then we should just go and do something else.”

“You should learn from your competitor, but never copy. Copy and you die.”

6. Find Yourself a Good Opportunity

“If you want to grow, find a good opportunity. Today, if you want to be a great company, think about what social problem you could solve.”

“In carrying out e-commerce, the most important thing is to keep doing what you are doing right now with passion, to keep it up.”

8. On success and Failure

“The very important thing that you must have is patience.”

“On the path to success, you will notice that the successful ones are not whiners, nor do they complain often.”

“Giving up is the greatest failure.”

“If there are nice rabbits on the ground and if you want to catch one, just focus on one.”

10. Take Care of your health

“No matter how successful you are in your career, you must always remember that we are here to live. If you keep yourself busy working, you will surely regret it.”

11. No enemy in business

“A real businessman or entrepreneur has no enemies. Once he understands this, then sky’s the limit.”

12. Find the right people, not the best people

“You should find someone who has complementary skills to start a company with. You shouldn’t necessarily look for someone successful. Find the right people, not the best people.”

“The world will not remember what you say, but it will certainly not forget what you have done.”

“30% of all people will never believe you. Do not allow your colleagues and employees to work for you. Instead, let them work for a common goal.”

“A leader should be a visionary and have more foresight than an employee.”