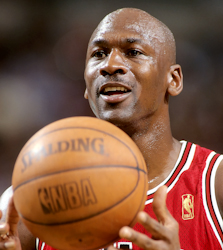 Born on February 17th, 1963, Michael Jeffrey Jordon, a former American professional basketball player, is believed to be the greatest player in the history of basketball and is considered most the influential figure in popularizing the NBA around the world in the 1980s and 1990s. Michael Jordan’s brilliant performance on the basketball field remains alive in public memory. He accomplished several titles and awards during his career and some of them are Naismith Memorial Basketball Hall of Fame Class of 2009, 10 NBA Scoring Titles, 2× NBA Slam Dunk Contest Champion – 1987, 1988, NBA Defensive Player of the Year – 1987–88 and countless.

In the early years of life Michael Jordan, in his words, was a confused child and could never excel academically. During high-school days, he remained a B+ student and played Football, baseball, and basketball.
His extreme and numerous failures made him extremely successful player. He missed over 9000 shots during his career, lost approximately 300 games; and on 26 occasions, when he was the person to take the game’s winning shot and he missed. “I have failed over and over and over again in my life. And that is why I succeed.” Michael Jeffrey Jordan. His defeat could never stop him, “Obstacles don’t have to stop you. If you run into a wall, don’t turn around and give up. Figure out how to climb it, go through it, or work around it.”
ESPN ranks him #1 on Sportscentury’s Top 100 Athletes of the 20th century.

“I’ve always believed that if you put in the work, the results will come. I don’t do things half-heartedly. Because I know if I do, then I can expect half-hearted results.”

“My attitude is that if you push me towards something that you think is a weakness, then I will turn that perceived weakness into a strength.”

“Some people want it to happen, some wish it would happen, others make it happen.”

“I play to win, whether during practice or a real game. And I will not let anything get in the way of me and my competitive enthusiasm to win.”