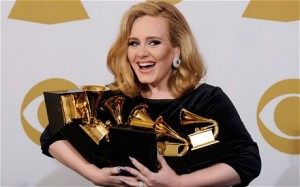 Popular singer and songwriter, Adele Adkins made a tremendous victory on the Sunday’s Grammy stage, making a grand comeback from vocal cord surgery winning six trophies including Album Of The Year award (Album ‘21’); Record Of The Year ( Rolling In The Deep); Song Of The Year ( Rolling In The Deep along with & Paul Epworth); Best Pop Solo Performance (Someone Like You); Best Short Form Music Video (For the song Rolling In The Deep; and Best Pop Vocal Album: (‘21’). Her album”21″ with over six million copies sold was also the Best Selling album of 2011. “21” became number 1 across 18 countries and 208,000 copies of it were sold in its first week in the United Kingdom. “Rolling in the Deep” toped in 8 countries including the Billboard Hot 100

To view the list of nominees and winners, Visit: http://www.grammy.com/nominees