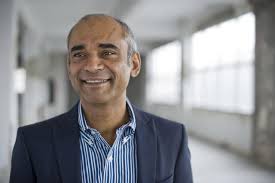 Indian-American businessman Chet Kanojia is founder and CEO of pioneering online TV platform Aereo, for which he has embroiled himself in a widespread legal battle with more than 17 network broadcasters including ABC, NBC and CBS. He has developed proprietary cloud-based miniature antenna which captures television signals travelling in the air and then streams them to customers through internet-connected devices such as smart phones, laptops and computers for substantially low monthly fees. Aereo has prepared itself for the legal battles and the matter is Sub judice before the Apex court of United States. Despite having stuck in huge legal battle, Kanojia has drawn widespread support from the tech world which include Barry Diller the chairman of InterActiveCorp who helped him raise $38 million and joined Aereo’s board.

Chet Kanojia is known as an innovative leader who holds over 14 patents in diverse fields of robotics and data communications systems. He has impacted the cable and telecommunications industries heavily coming up with groundbreaking or beyond the traditional or conventional solutions for which he was enlisted in ‘40 under 40’ by Multichannel News.’ He also founded Navic Networks, a software developing company to assist cable companies in interacting with their customers. It was sold to Microsoft in 2008 for $250 million.

He holds an undergraduate degree in mechanical engineering from Regional Engineering College in Bhopal, India and a master’s degree in computer systems engineering from Northeastern University, US. He is more interested in advancing and enhancing the world through technology than being knows as a business giant.