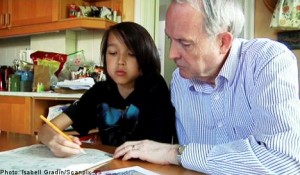 Professor Sven Hovmöller says, “It’s a really hard problem that I’ve been working on for eight years without being able to solve”. He is a respected and esteemed professor who had been requested to write an article on the Structures of pseudo-decagonal approximants in Al−Co−Ni, a type of quasicrystal riddle, that was predicted not to have existence until recently for the journal ‘Philosophical Transactions of the Royal Society’.

According to the professor, Linus is passionate about solving Sudoku number puzzles and he is very skilled also. The fact compelled his father to request him to have a closer look on the problem and Linus surprised him by successfully soling the quasicrystal riddle. The paper of the discovery has been published in the most reputed science journal where Linus has been named as the co-author along with his father. Linus is the youngest ever to be published and as the author of a paper in 352 year of the Royal Society.

Why You Should Never Underestimate Your child?

Growing up with the environment, we develop a sense of prediction about difficulties and it becomes visionary as a whole before we get into anything – a journey or a task – and that gives a signal to step back or go ahead. On the other hand children neither see troubles, dangers nor limitations; they enjoy difficulties as fun and that way when Linus was asked how he felt about his accomplishment, he replied, “We tried to solve this puzzle and in the end we did. It was fun for me”.

Children are blessed with the mind that is an infinite empty space; as the time passes by the mind gets occupied by limiting thoughts and false perceptions. As a result we fail to make best use of it. Children, on the other hand, have every opportunity to be enlightened. We just have to respect them and let them do what they want to.