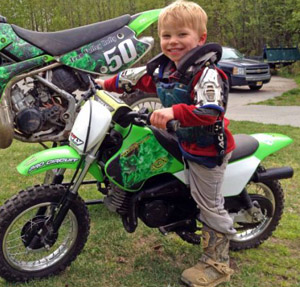 At the age of three, Chase Anderson accomplishes the task considerably difficult for the pint-sized body – he is on the street with his 50cc motorbike ready to compete against the boys twice and thrice of his age as well as size. He is not only the youngest fanatic bike-rider of his family from Alaska but the world’s youngest motocross rider. From the very tender age of two, he has been riding dirt bikes. Chase is being trained by his father who himself is a tough bike rider.

His father Andy says, ‘When we see him ride I feel so proud….We also feel worried but we wouldn’t let him ride if we didn’t think he had the skills.” He also says that his son is crazy about bike riding, spending several hours riding his bike. He’s even learning the basic mechanics of the bike and doesn’t like being helped. Andy further warned people against pushing their kids into bike racing without proper training and protective clothes.