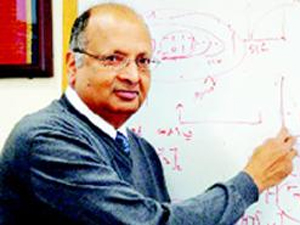 An India-born engineer-scientist Arogyaswami J Paulraj has been honored with prestigious 2014 Marconi Prize (considered equivalent to ‘Nobel’ prize for technology initiators or pioneers) for his subsequent contribution in developing the theory and applications of MIMO (Multiple Input Multiple Output) technology, which is extensively used in mobile devices. His finest discovery of using multiple antennas at the transmitting as well as receiving stations has redefined and revolutionized the high-speed mobile wireless communication.

Arogyaswami Paulraj was born in Pollachi, India. After finishing his school at the age of 15, he joined the Indian Navy in 1961 through NDA (National Defence Academy) where he worked for long 30 years. From early years, he had interest in information theory and signal processing which ultimately led him to completing a bachelor in electrical engineering from the Naval College of Engineering in 1966 and doctorate in electrical engineering from the Indian Institute of Technology, New Delhi in 1973. In 1977, he was assigned to develop advanced sonars by the Navy and he along with his team successfully developed a world-class sonar system (APSOH).

Before moving to the United States in 1991, Paulraj worked as the founding director for CAIR (Center for Artificial Intelligence and Robotics), CRL (Central Research Labs of Bharat Electronics) and CDAC (Center for Development of Advanced Computing).
On arriving United States, he joined Stanford University as a research scholar. In the year 1992, he invented MIMO wireless communications that enabled improved wireless performance. The concept of MIMO faced extensive skepticism and criticism in initial years one whether or not there was need to invest money on his idea. Though he was awarded the patent in 1994 but it took him near 10 years to use MIMO for practical purposes. Ho founded his own company Iospan Wireless Inc. in 1998 and continued furthering the research on MIMO’s commercial application. He struggled and endured criticism but continued believing in his ideas and earned what he deserved.

Over the years Paulraj has authored more than 400 research papers and two text books. He is also the chief or co-inventor in 59 US patents. His contribution has been internationally recognized and he received several defense and national-international awards including Ati Vishist Seva Medal, Scientist of the Year Award, Distinguished Alumni Award, IIT(Delhi), Padma Bhusan (in 2010), fellow of IEEE and AAAS and others.