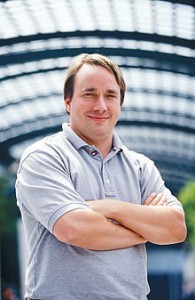 Linus Benedict Torvalds, a Finnish-American software engineer and hacker, widely known for the development of the ‘open source’ operating system, Linux kernel. His other creations include the revision control system ‘Git’ and the Scuba diving log book software, Subsurface. Nowadays, Torvalds works as the chief architect of the Linux kernel, and plays the role of the project’s coordinator.

Torvalds started working on Linux in the year of 1991 whilst he was still a student at the University of Helsinki, Finland. He released Linux version 0.01 in the month of September and uploaded it to FTP server of the Finnish University and Research Network with 10,239 lines of cod. The same year he released the Linux version 0.02.

Torvalds was awarded on several occasions: In 1998, he received an EFF Pioneer Award; in 2000, the Lovelace Medal from the British Computer Society; and in 2010, the C&C Prize by the NEC Corporation for his ” significant contributions to the development of the information technology industry.. He has been featured in Time Magazine for several times: In 2000, he was enlisted in Time 100: The Most Important People of the Century Poll; in 2004, he was enlisted amongst the most influential people in the world; in 2006, he was enlisted amongst one of the revolutionary heroes of the past 60 years.

“I used to be interested in Windows NT, but the more I see it, the more it looks like traditional Windows with a stabler kernel. I don’t find anything technically interesting there.”

“The fame and reputation part came later, and never was much of a motivator, although it did enable me to work without feeling guilty about neglecting my studies.”

“Software is like sex: it’s better when it’s free.”