“We cannot sustain ourselves, unless we contribute towards the society in someway or the other. I strongly feel if even one person does his bit towards social good, there will be some change” P Kalayanasundaram 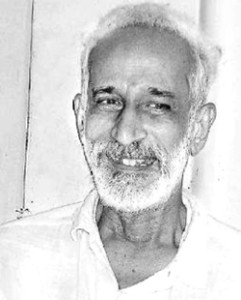 The social worker from Tamil Nadu P Kalayanasundaram has taught us some priceless lessons about the wealth of sympathy, kindness and generosity through his life-long dedication and flawless services to the orphans and helpless. Throughout his 35-year-long career as a librarian at the Kumarkurupara Arts College at Srivaikuntam in Tuticorin district, he ensured his entire salary to go for the noble causes. He has also given away Rs. 10 Lakh that he received for his pension. Besides giving his salary away, he also collects money, cloths and household objects from generous people and distribute them among the poor people. He has also contributed to the cyclone relief funds in Orissa, Tamil Nadu, and Andhra Pradesh and pledged money for the earthquake victims in Maharashtra and Gujarat.

P Kalayanasundaram was born and raised in Melakaruvelangulam village of Nangunari taluk in Tirunelveli district of Tamilnadu, India. From childhood he was fascinated by Gandhian principles that he practiced for his whole life. He is a gold medalist in Library science and has completed his Master degree in Literature and History from Madras University. His incredibly altruistic devotion towards bringing up joy and hope in the painful lives of underprivileged people makes him the man of millennium. His simplicity and dedication in practice have attracted internal attention and honors including `The Best Librarian in India’ by The Union Government (of India), `one of the noblest of the world’ by the International Biographical Centre, Cambridge, one of the Outstanding People of the 20th Century by the United Nations Organisation and `Man of the Millennium’ by an American organization.

Benevolence and generosity we offer to others, return like a boomerang someday! Inspired by his gallant affection and passion to help the poor and helpless, Film Star Rajinikanth has adopted him as his father.

1. Come out from your confinement and share compassion with people around. Sometimes we get so attached with our own smallness and live occupied with I-me-myself, that we forget to ponder over the vastness of pain and sorrow in the people around. P Kalayanasundaram is the perfect example to attune our mind towards enormity; he sets us free from our acquisitiveness and diminutive attitude towards ourselves.

2. When we offer generous gesture to the people around we become blessed with our own blessedness.

3. P Kalayanasundaram helped others without any slightest expectation of gain and today when he is in need in his old and frail days, he has got hundreds to take care of him. Benevolence and kindness you offer to others come back as a boomerang someday.

4. Simplicity is the freedom of living a sophisticated life. Superfluous possessions are very deceitful that put unnecessary load and complications including tension, depression and miseries in your life.

5. Humility. He who is never loud mouthed about his offerings shines with double luster of greatness and grace.