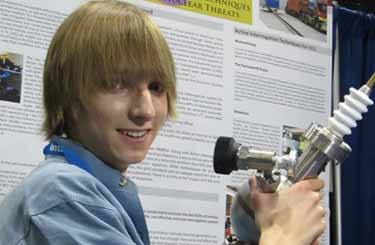 Taylor Wilson, a 17 year old US citizen, became the anti-terrorism tactics advisor of the Department of Homeland Security as well as the coordinator of the U.S. Department of Energy on nuclear fusion research. According to the World Records Academy, Wilson is world’s youngest nuclear scientist. He is not only the first person to create Nuclear Fusion but also 31st person who has accomplished it privately outside of government as well as industry.

Ever since childhood, Wilson has always been passionate about exploring the power of science. In his words, “I’m obsessed with radioactivity. I don’t know why…Possibly because there’s power in atoms that you can’t see, an unlocked power.” It is known that at age 7, Wilson had knowledge of every rocket built by the U.S. and Soviet governments from the 1930s. At age 11, he started mining with his father for uranium in the New Mexico desert, and purchasing vials of plutonium through several sources and finally at 14, he reached the milestone of become the world’s youngest person to build a nuclear fusion reactor (as per the claim of MentalFloss)

Wilson’s another notable project includes creating a Nuke Detecting Device, which will help the US government in countering Nuclear Terrorism. It was successfully displayed at the Intel International Science and Engineering Fair and got him the first prize and the reward money of $50,000.