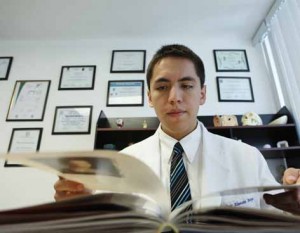 16-year-old Mexican teenager Andrew Almazán Anaya set the world record of becoming the world’s youngest psychologist after completing his diploma from the Mexico University on August 18, 2011.

Almazán aspires to complete graduate degree in educational psychology and then finish research on gifted children and diabetes, specializing in neurology and neuroscience.Currently, Almazán is pursuing degree in medicine from the Panamericana University in Mexico City.

Almazán is considered to be the child prodigy who at the age of six, completed reading all the works of Shakespeare, and had an amazing memory according to his surgeon father’s statement. From early childhood, he had passion for medicine and psychology. In 2009, he won the Youth Prize in the category of “academic, scientific and professional activities,” awarded by the Mexico City municipal government.