“…If you think you dare not, you don’t, If you like to win, but think you can’t, It’s almost certain you won’t. If you think you’ll lose, you’re lost, For out of the world we find, Success begins with a person’s will- It’s all in a state of mind….” Walter D. Wintle 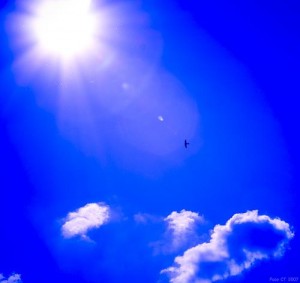 The Power of Perception

Once a man found an eagle’s egg and kept it in a prairie chicken’s nest. The young eagle eventually hatched along with the brood of chicken, whom he assumed to be his own siblings. He adopted and accepted their lifestyle and considered himself to be a prairie chicken. He would fly a short distance and go airborne just a few feet off the ground throwing and flapping his newly grown-up wings. One day, while scratching the dirt for worms and insects, he experienced the magnificent sight of some eagles soaring high gracefully in the wind towards the heaven. His heart immediately filled with inexplicable ecstasy. A deep desire arose from his within to fly high and catch the current of the wind. In an admiration of their courage, he asked his brothers, “How can they fly so high while we struggle to flap a few feet off the ground?”

“Well they are eagles, they are the kings of the sky..don’t even give a second thought for flying so high… we are prairie chickens; we can never fly like them.”

The young eagle didn’t go for further questions despite having a strong longing for soaring high in the powerful wind. The Prairie chickens’ voice were so loud and persuasive that downed his own inner voice and he never tried to take a venture on discovering his real potential and identity.
Years rolled by and one day, while searching for insects along with his siblings, he was caught by an old eagle who was puzzled to see such a weird eagle.

“Stop digging the mud and hopping like a chicken…an eagle is not supposed to behave like this.” the old eagle asked.

‘But I am just a prairie chicken…I can’t soar like you.’

‘Are you convinced with the voices around you? It seems you are happy being a prairie chicken.’

“No I’m not; I really want to fly like you but it’s not possible for me.”

“Turn your desire into action! This is not the place where you belong.”

The old eagle did not say further words and flew away.

The words of wisdom echoed in his ears and strained his heart for the whole day. The young eagle made a strong resolve to know the truth. He went to a high hill and jumped. Initially, he struggled but soon started flapping his winds with all his strength and courage. His wings started taking full advantage of the powerful current of wind and he soared effortlessly and graciously. He came out of his vacillation between prairie chicken and eagle. It was the first time his wings received an authentic taste of heavenly pleasure in flying like an eagle. His risk paid him off with a precious worth.

Moral of the story

If you choose to be a man of your perception that is formed on the verdicts of prairie chickens around you, you will never explore, dream and discover your real worth. Your belief system is the outcome of your perception. If you build a wrong belief system about yourself, you will be destined to live like a Prairie chicken. You potential of soaring high with unbeatable courage and gracious spirit like an eagle shall remain buried deep inside.

You are the man of your perception. If you think you can do, you are right; and if you think you can’t, you won’t. Either way you are right. It is important to have a thoughtful self-analysis in order to be the ruthless pioneer of a new path or the man of your deep desire. One can never take the route of an eagle considering himself to be a prairie chicken; for one has to change one’s perception. Confront your fear, work rigorously to eliminate them anyway and anyhow. Accept seemingly difficult tasks and never accept any negative remark while forming perception about yourself.

What goes wrong while forming perception?

While forming perception, we often pay more attention to the things that limit our efficacy. We tend to listen to the others’opinions and pay special attention to self-limiting thoughts and beliefs. We allow our negative emotions to take over our mind and force it to live with negative belief system.

“We are all in the gutter, but some of us are looking at the stars.” Oscar Wilde

Perception creates two types of people; one who feel there is nothing impossible in the world and they can accomplish everything they desire; and the other who think that opportunities are awfully less for them and they seldom pay attention to their inner strength and power. People with strong and positive perception become examples of greatness and the blueprint of success whereas the negative people warn us to not follow their path.

If the doors of perception were cleansed every thing would appear to man as it is, Infinite. For man has closed himself up, till he sees all things thro’ narrow chinks of his cavern.” ― William Blake,

Ask probing questions to yourself

Is there any thrill without any adventure or expedition and a mighty feeling of joy in reaching the destination without difficulties?

Is there any interesting game that doesn’t entail intricate tricks and strategies?

Can there be any greater feeling of fulfillment than the feeling of accomplishing the task that you considered to be impossible? There is no heavenly pleasure in easy ride.

Change your perception about your worth, don’t underrated it. Don’t let the promises and strengths inside you die and your steady knee give away just because you are told by some chickens or you have perceived yourself this way. Don’t hesitate to modify your perception whenever required.