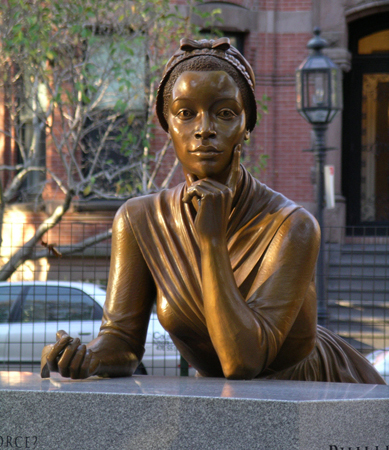 Phillis Wheatley, the most notable name in African-American women and the first and most accomplished African-American poet whose achievements and popularity swept away the sense of intellectual inferiority among black people. Many of her accomplishments forced for an acceptance that ‘black people can also write’.

It is known that Phillis Wheatley was born in 1753 in West Africa and died on December 5, 1784, in Boston, Massachusetts, U.S. In 1761, at the age of seven, she was taken to Boston and sold to a tailor couple, John and Susanna Wheatley, as a family servant. Her first name, Phillis, was primarily given by the name of the ship that carried her to America. She came to Colonies with seldom knowledge of English but quickly she made an impressive command over Latin and English; moreover, within few months she mastered over the difficult verses of Bible.

Her literary talents and fostering interest in Alexander Pope, Homer and Milton at such a younger age overwhelmed the Wheatley family and interested them to have her assistance in nurturing her skill. At the age of twelve, her first poem “On Messrs. Hussey and Coffin.” was published and encouraged Wheatley’s family friend The countess of Huntingdon, Selina Hastings, to finance her education. At the age of fourteen, she proved herself to be exceptionally mature and talented poet.

In 1773, a collection of poems under the title of ‘Poems on Various Subjects, Religious and Moral’, which is known as her most notable work, was published in London.

After the death of her master Mr. Wheatley in March 12, 1778, Phillis married a free African American, John Peters on April 1, 1778. After marriage, she had a contradictorily sad life ahead with Peters who was considered an irresponsible man with little financial help to his wife. Ultimately, she had to live the life of a maid. Due to financial scarcity, she could not publish her second book of verse. She had three children, two of whom had died by the time she wrote her last published poem. After a lonely and miserable life, Phillis died during childbirth on the 5th of December, 1784, in a boarding house in Boston.

Two of her books published posthumously were Memoir and Poems of Phillis Wheatley (1834) and Letters of Phillis Wheatley, the Negro Slave-Poet of Boston (1864). Some of her best known poems are: “To the King’s Most Excellent Majesty,” “To the University of Cambridge in New England,” “An Elegiac Poem, on the Death of the Celebrated Divine…George Whitefield,” and “On the Death of Rev. Dr. Sewall,”.