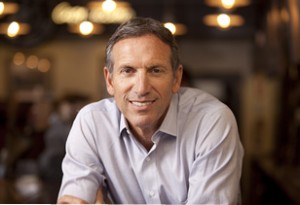 Howard Schultz, an American business magnate, is widely known as CEO of Starbucks, the global coffee house; and the former owner of the Seattle SuperSonics, the former basketball team. In 1998, along with Dan Levitan, Schultz co-founded an investment group named Maveron.

Schults wasn’t born in an economically sound family. His father would do multiple jobs in order to support the family; he’d work as a truck driver, factory worker as well as taxi driver. According to the reports of The Guardian, Schults wanted to create a company that his own father never had the opportunity to work for. At the age of only seven, he saw his father losing his job, and breaking his ankle while working as a diaper service delivery driver. He lived in an overcrowded two-bedroom unit in an apartment building where 150 families would reside. When he got the chance to Northern Michigan University on an athletic scholarship, he became first person ever from his family to have an opportunity to go to college.

Howard Schultz has received several awards and honors. In 1998, Jerusalem Fund of Aish Ha-Torah honored Schultz with the “Israel 50th Anniversary Tribute Award” for “playing a key role in promoting a close alliance between the United States and Israel”, In 1999, “National Leadership Award” for his contribution and educational efforts to fight against AIDS, in 2007 the FIRST Responsible Capitalism Award and in 2011 he became Fortune Magazine’s “2011 Businessperson of the Year” for his contribution to the global economy.

“I believe life is a series of near misses. A lot of what we ascribe to luck is not luck at all. It’s seizing the day and accepting responsibility for your future. It’s seeing what other people don’t see And pursuing that vision.”