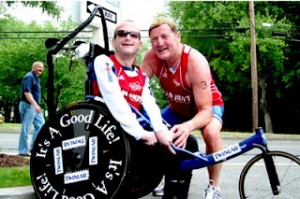 This is unarguably one of the greatest motivational stories of all time. The story of a father who climbs mountains, swims across rivers and runs to the farthest corner of the world – all to ensure his son lives a better and meaningful life.

Dick Hoyt is a father who runs marathons and triathlons along with his physically disabled son Rick Hoyt who has been with him in every athletic endeavors including, cycling and swimming. Dick pushes him in a special wheelchair while running, pulls him in a boat while swimming, and carries him in a specially designed seat in the front of a bicycle. In 2008, the Team Hoyt was inducted to the Ironman Hall of Fame.

Dick’s son Rick was born in 1962. Due to oxygen deprivation at the time of birth, he developed a rare form of disease called cerebral palsy. During birth, the umbilical cord was found to be twisted around Rick’s neck, blocking oxygen supply and as a result his brain stopped communicating with the right messages to his muscles. Unfortunately, Rick had no chance to recover and live a normal life; therefore, his parents were suggested to institutionalize Rick but his parents didn’t go for it. They helped Rick in every possible way to let him feel a normal person. In 1972, Dick spent $5,000 and hired a group of talented and experienced engineers who developed an interactive computer. In 1975, at the age of 13, Rick finally attended a public school. Later, on completion of his high school, he attended Boston University where he completed a degree in Special Education in 1993.
In 1977, upon Rick’s request, Dick first teamed up with his son and participated in a 5-mile benefit run for a Lacrosse player who had been paralyzed in an accident. That was the beginning of the Team Hoyt’s journey. Dick decided to continue with the race when Rick expressed his great feeling to him by saying, “Dad, when I’m running, it feels like I’m not handicapped.”

At the beginning of their career, they would run 50 races per year and together, they were called the Team Hoyt. As of now they have completed over 1100 races including marathons and triathlons. Dick is now 72 years old and his son has turned 50 but they have no plans to retire.

The story of Rick and Dick Hoyt – Team Hoyt