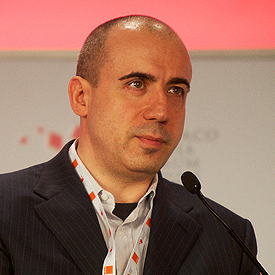 Yuri Borisovich Milner is a Russian billionaire, entrepreneur and venture capitalist who founded investment firms Digital Sky Technologies, which is now called Mail.Ru Group and DST Global, through which he has invested in Twitter, Facebook, Zynga, ZocDoc, Spotify, 360Buy.com and

In 1985, Milner graduated from Moscow State University with specialization is theoretical physics. Later, he attended one of the institutes of the Russian Academy of Sciences, Lebedev Physical Institute where Nobel Prize winner Vitaly Ginzburg used to work. Between 1990 and 1992, Milner attended the Wharton Business School’s MBA program. While he was a doctoral candidate in particle physics, he came in contact with Soviet nuclear physicist and human rights activist Andrei Sakharov, whose modern and fast forward thinking influenced his venture investment strategies.

In July 2012, Milner founded the Fundamental Physics Prize with $3 million award money. His idea has become instantly famous with lucrative money which is far more than the Nobel Prize as well as the Templeton Prize combined. He himself declared the first nine winners’ name and deposited $3 million in the bank accounts of each of them. They are the first winners of a new honor created by Milner ‘the Fundamental Physics Prize’. But he has mentioned that future winners will be selected by the previous recipients.

“I wanted this amount to be meaningful….I think top scientists need to be compensated at a different scale in society. Somebody with experience will tell you that true scientists are not motivated by money – they are motivated by the quest itself. That is true. But I think an additional recognition will not hurt.”

He feels that modern fundamental physics, a remote and unpopular field, should be brought to masses, especially school and college students and young scientists.

Yuri Milner has been awarded and honored with several titles including The Smartest People in Tech in 2010 by Fortune, World’s Billionaires in 2011 by Forbes, Owners of Virtual Reality List in 2011 by Forbes (Russian Edition), Top 50 Digital Power Players in 2012 by Hollywood Reporter, The Silicon Valley 100 in 2012 by Business Insider, and many more for his significant contributions.