Success Story of Zappos CEO Tony Hsieh who quit Oracle at the age 23 and founded LinkExchange in 1996. Three years later, he sold it to Microsoft for $265 million. 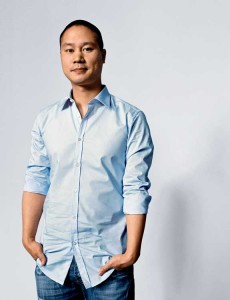 At the age 23, a Computer Science graduate from Harvard University took a brave decision: It had been barely 5 months since Tony Hsieh had joined his dream company ‘Oracle‘ and he decided to quit with no real plans for future. In an interview to CNBC, Hsieh said, “I did not want to carry on with my job just because it paid me a handsome salary. The job lacked creativity and the corporate environment wasn’t my style.”

The biggest business lesson I learnt

While at Harvard, Hsieh started his first business – selling pizzas and hamburgers to the students in his dorm. He somehow managed a small space at The Quincy House Grille and worked part time. One of his customers was Alfred Lin with whom he later collaborated and co-founded Venture Frogs in 1998 and Zappos in 1999. Selling Pizzas weren’t much profitable but he learnt the biggest business lesson of his life. In his words, “Growing a business is a lot of hard work and I learnt the importance of customers’ satisfaction.”

After quitting the job, Hsieh spent some months understanding the Internet’s impact on business strategies, especially marketing. Finally, in March 1996, he launched LinkExchange, an online advertising network from his apartment bedroom with the investment of small savings. He got his first 30 clients by emailing webmasters and sending them a small letter that explained the true potential of display advertising. The idea was an instant success! In less than 3 months, Hsieh managed to draw over 20,000 participating web pages to LinkExchange, with over 10 million ads being displayed everyday. By the end of 1998, the site membership crossed 400,000 mark and displayed about 5 million ads per day. The phenomenal success of LinkExchange made it one of the fastest growing Internet companies of late 90s. In November 1998, Hsieh sold the company to Microsoft for $265 million.

In 1999, when Nick Swinmurn first contacted Hsieh, he did not like the idea of selling shoes online and deleted Swinmurn’s first voice mail. In Hsieh’s words, “Do not jump into a business you know least about.”
A couple of days later, Swinmurn sent him a mail containing the details of the US footwear market, which stood at about $40 billion. Swinmurn specifically mentioned that the paper mail orders accounted for about 5% of total sales. About two months later, Hsieh joined Zappos as the CEO and first year they made no profit at all.
In 2000, the company made 1.6 million in gross merchandise sales. The next year, it crossed 8.6 million mark and in 2003, it made about 70 million. By the end of 2009, Zappos annual revenue touched $1 billion. On July 22, 2009 the company was taken over by Amazon.com for $1.2 billion. Hsieh continues to serve the company as the CEO.

In June 2010, Hsieh published his first book titled Delivering Happiness that gives a detailed account of his entrepreneurial endeavors. In the very first week, the book reached #1 on the New York Times Best Seller List and stayed on the same position for 27 consecutive weeks.