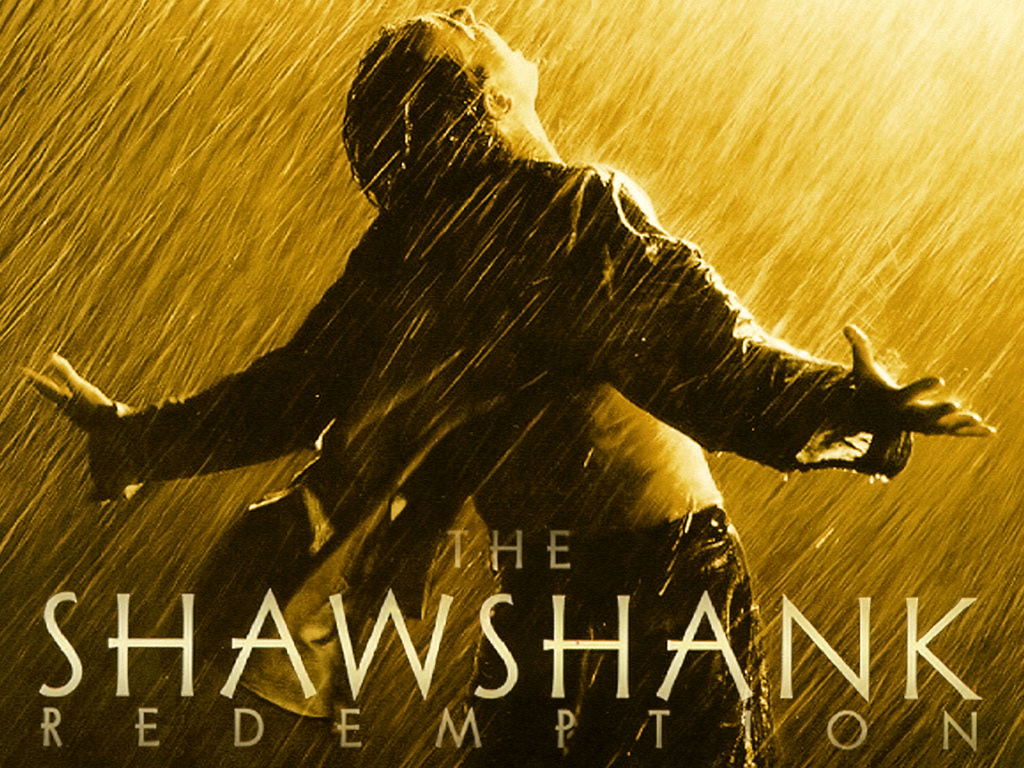 The Shawshank Redemption is based on a short story written by Steven King and directed by Frank Darabont. The movie portrays the bond being shared between two men during the years of their imprisonment who share emotions and find solace in each other, ultimately paving their way to salvation. The movie also shows how to maintain one’s self significance in the most disintegrated and hopeless place.

A well-known banker Andy Dufresne is convicted of murdering his wife and her lover in 1947 and serving two life sentences at Shawshank State Penitentiary. Andy becomes a good friend with a smuggler named Ellis Redding, who is known as “Red” in jail. Red manages to supply a rock hammer to Andy to create a small stone chess pieces and gives large poster of Rita Hayworth, Marilyn Monroe and Raquel Welch whom Andy praises for their brain and beauty. In course of time, Andy earns good friends for his moderate behavior, respect for banking knowledge and initiation for library renovation, which was nearly an impossible task for the penitentiary like the Shawshank. Despite having some good friends and earning respect he is regularly assaulted by the notorious “bull queer” gang and their leader and exploited by corrupted Warden Samuel ‘Norton’, who appoints Andy for the laundry service, later at library and then for the managerial works. His expertise is soon sought after by other guards at Shawshank as well as nearby prisons.

Andy claims he is innocent and tries to prove it by approaching Norton with the information that ‘someone on the other cell is locked up for identical crime’ – the news he collects from Tommy Williams, who is imprisoned for burglary, but Norton refuses the fact, murders Tommy and sends Andy to a solitary confinement for months. Norton is consistently taking the best out of Andy by compellingly involving him in a scam – Norton exploits prison labor for public works and forces Andy to launder the money under the alias “Randall Stephens”. In course of nineteen years, Andy made a tunnel by rock hammer and eventually escapes for his freedom with all the original documents of the alias Randall Stephens and makes him alive and takes out all the money the he had submitted under that name.

International Movie Database enlists the movie Shawshank Redemption as #2 on its top 250 movies of all time. The movie is full of life lessons which are certainly better understood and felt after watching it.

1. Hope is always a good thing

After serving four decades of life in jail Red is exhausted, relying upon hope to get out that dark, drab and shabby place, which becomes the sweet home for majority of prisoners by then (an acceptance of their destiny – a real apathy), But Andy is extremely hopeful about life in spite of being assaulted by ‘The Sisters’ Gang – a prison rapist, exploited by ruthless, and remorseless Warden Norton, thrown in solitary confinement for his attempt to defend his innocence. He says, “There are places in this world that aren’t made out of stone… there’s something inside… that they can’t get to, that they can’t touch. That’s yours… Hope.” Andy says the words above in response to Red’s remark, ‘Let me tell you something my friend. Hope is a dangerous thing. Hope can drive a man insane.

It is hope that drives Andy to dig his cell’s wall with a rock hammer. The task which is believed to have taken a person six hundred years to finish, he finished it in less than twenty years. It is hope that inspires Andy to write a letter to the state government for funds to renovate the decrepit prison library for consistent six years, which, according to Warden Norton, was an impossible task. It is hope that helps Andy to stay poised and persistent in The shawshank for the crime he actually never committed and find some friends in a place where integrity and self-respect lacks; it is hope and faith of Andy that takes out Red from jail and helps him live his dream; it is hope that ultimately rewards Andy with freedom. In the end, Andy reminds Red “Remember, Red, hope is a good thing, maybe the best of things, and no good thing ever dies” in a letter where he invites Red to join him in his project.

2. Get busy living or get busy dying

After being confined in a hopeless place among desperate and impossible people for several years, it becomes unfeasible to think of a fresh and free life outside; however, there are some courageous souls who dare to steal the best of the place to have better interpretation of life. They aren’t meant to be caged, their features are just too bright.

Brooks Hatlen, who has been there for five decades, was freed on parole but he hangs himself outside in a free world where he finds the life too fast to catch up with and live. He was better in the grey place of jail with restriction and limited resources. As for Andy it wasn’t the place to be adjusted and he has never accepted his deprivation from his real position. He just keeps himself busy in making life meaningful in every possible way inside the penitentiary and trying to find out the way to get out of the place. Before escaping, he leaves Red with full of hope and faith to meet him outside. Andy and Red make their life dreamy and wonderful outside.

Be hopeful regardless of wherever you are, whatever you or however circumstances treat you, you will not receive the less than you desire or deserve.

3. Crawl through the river of shit

“Andy crawled to freedom through five hundred yards of shit smelling foulness I can’t even imagine, or maybe I just don’t want to. Five hundred yards… that’s the length of five football fields, just shy of half a mile.” – Red

Sometimes you have to ‘crawl through river of shit’ to get out clean on the other side. Life is never meant to be easy or smooth, it is capriciously treacherous in every turn, but it requires liberating our mind, body and soul to believe in an enlightened life. Andy is never convinced by the bullshit rules and regulations of Shawshank, though he pretends to belong to that place, and decides to face the improbable and break the toughest rock and crawl through a long, dark, scruffy canal to make his way to freedom. It’s very true to our life, we all have to stumble upon uneven and bumpy roads, struggle against them, and sometimes crawl through shit to make life worth living.

4. Persistence and perseverance are key to success

Andy eventually proves that ‘persistence is the key to succeed’. After taking permission from Warden Samuel Norton, Andy starts writing a letter a week to the state government to improve prison library for many years just to hear ‘No’ for hundreds of times. Instead of giving up, he starts writing two letters a week and finally they send him some money, books and later a promise to donate $500 a year for the library innovation. When everyone told him not to waste time in sending letters, he took on persistence to see what happens. His persisted and that paid him off.

He digs and makes tunnel through his cell for long nineteen years with little rock hammer without giving anyone the slightest sense about it. The impossible prison wall would take six hundred years to tunnel through but Andy accomplished it in less than twenty years. Persistence shows us the way to come out of our darkest place.

5. Keep your mind occupied when things around aren’t just fine

When things are just against you, find a quiet way to stir your weary spirit and do anything that keeps your mind occupied with something meaningful for yourself and the people around you. Andy did several things in his slow prison time – he would do library work, perform managerial tasks, do tax returns for the guards at Shawshank, and offer profitable financial plans for the prison staff. He also helped Tommy Williams (prisoner) to learn to read. Life becomes meaningful with your honest effort regardless of where you are.

6. Exploiting others will lead you to an endless trouble

Warden Samuel Norton exploits prison labor for public works, makes profit by undercutting costs of skilled labor and uses Andy for laundering the money using the alias ‘Randall Stephens’. Andy escapes Shawshank with all the original documents of ‘Randall Stephens’. Posing himself as Randall Stephens, he visits different banks and withdraws all the laundered money for long 19 years.

After escaping Andy informs to a local Shawshank newspaper about the corruption and murders of Tommy with the ledger and evidence. Finally the police arrive at Shawshank and take Hadley (who was involved in Norton’s murder and corruption) into custody but Norton shots himself to avoid arrest.

Think twice before you take chance on others.

“Life is never fair; Pain and suffering are the pesky part of being human; pain hurts and you can’t escape from it. But it is pain that makes us feel the beauty and tenderness of life, freedom of healing and magnificent feeling on getting the wings to fly.”