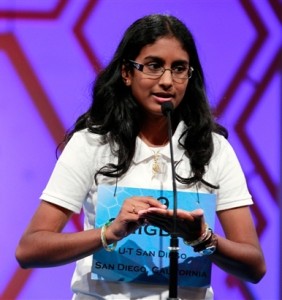 Snigdha Nandipati, a 14 year old 8th grade Indian-American student from Francis Parker School, Mission Valley, San Diego won America’s 85th Scripps National Spelling Bee. She is the fifth consecutive Indian-American and 10th in the last 14 years to win the competition. Her final word of the competition was ‘Guetapens’ a word of French Derivation which means a trap, ambush, or snare.

Snigdha had competed in last year’s contest and managed to secure 27th place. Her elimination came when she misspelled the word “kerystic”. This year, she seemed more confident and poised throughout the competition, defeating a total of 278 contestants.

According to reports, a total of 11 million kids from across the globe participated for this year’s Spelling B out of which only nine could compete in the final. Those included Frank Cahill, Emma Ciereszynski, Lena Greenberg, Hoffman, Arvind Mahankali, Stuti Mishra, Nandipati, Nicholas Rushlow, and Gifton Wright.

According to the Spelling Bee’s official site, “Snigdha loves reading random facts in encyclopedias, especially the ones pertaining to science or history. She utilizes her spare time by reading whodunits and adventures. She also has passion for violin and collecting unique coins from around the world.”

She is fluent in Telugu and wants to celebrate her victory by making a trip to her native place in India. Snigdha’s grandfather, who traveled from India with her grandmother only to watch her compete, rushed up to the stage and gave her a hug when she was announced as the winner.

Prizes for winning the