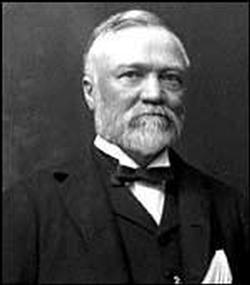 Andrew Carnegie, a Scottish-American industrialist and the greatest philanthropist in his epoch, is known to be the most influential person whose greatest contribution in expanding the American steel industry in 19th century makes him immortal. He donated his most of the fortune to establishing schools, libraries, and universities across the United States and Europe. He was a self-made man for his economic, cultural as well as intellectual developments. He is often considered to be the second richest man in history after John D. Rockefeller.

From his young age he would love to listen about famous Scottish heroes such as Rob Roy, William Wallace, and others from his uncle. The inspirational stories, in his words, worked as driving force for his life and inspired him to keep looking for better opportunities.

In 1848, his family immigrated to the United States, where he started working in a bobbin factory as an ordinary factory worker. Young Andrew worked almost all the day, 6 days a week as a bobbin boy to make only $1.20 a week. His father was a weaver, and his mother bound shoes to make a living. He and his parents shared half of a considerably big, ground floor apartment with another poor family. After some time, he became a messenger boy in the Pittsburgh Office of the Ohio Telegraph Company, at $2.50 per week. Within one year he was promoted as an operator for his determination, alertness and hardworking nature. In1853, he took up a job at Pennsylvania Railroad as a secretary/telegraph operator at a salary of $4.00 per week. In less than three years, Carnegie was promoted to the post of superintendent. While working for the railroad, Carnegie got the opportunity to understand the infrastructure market and started making investments. He could envision the greatest prospects in oil, steel and construction industries and made many wise choices that gave him substantial returns on investments.

In 1864, he invested $40,000 at Story Farm in Pennsylvania and within one year his humble investment made him a millionaire. Finding the potential in steel, he invested in iron and subsidiaries. In 1865, after the end of the Civil War, he solely concentrated on the steel industry. Later, he merged Hi steel company with Federal Steel Company and several others and established the U.S. Steel.
In 2007, according to List of wealthiest historical figures, based on information from Forbes, his net worth was approximately amounted to $298 billion dollars.

“The ‘morality of compromise’ sounds contradictory. Compromise is usually a sign of weakness, or an admission of defeat. Strong men don’t compromise, it is said, and principles should never be compromised.”

“People who are unable to motivate themselves must be content with mediocrity, no matter how impressive their other talents.”

“Think of yourself as on the threshold of unparalleled success. A whole, clear, glorious life lies before you. Achieve! Achieve!”

“The average person puts only 25% of his energy and ability into his work. The world takes off its hat to those who put in more than 50% of their capacity, and stands on its head for those few and far between souls who devote 100%.”

“Immense power is acquired by assuring yourself in your secret reveries that you were born to control affairs.”

“Here is the prime condition of success: Concentrate your energy, thought and capital exclusively upon the business in which you are engaged. Having begun on one line, resolve to fight it out on that line, to lead in it, adopt every improvement, have the best machinery, and know the most about it.”