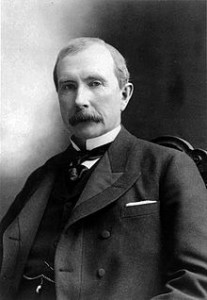 John Davison Rockefeller, an American oil industrialist, investor, as well as philanthropist, founded the most dominating and successful company of 19th century, Standard Oil Company, in 1870 and led the company most successfully until he retired in 1897. Rockefeller founded the company with the partnership of his brother William Rockefeller and investors Jabez Bostwick, Henry Flagler, Stephen V. Harkness, and chemist Samuel Andrews. In less than two years, their business touched the pinnacle of success with the increasing demand of kerosene and gasoline oil.

Born on 8th of July 1839, John D. Rockefeller was the second of six siblings born to a travelling sales man William Avery Rockefeller and a homemaker Eliza Davison. His father could never do a permanent work and often took up odd jobs to support his family. His mother, on the other hand, would struggle to bring stability at home and sell potatoes, candies and even raise turkeys. In 1853, Rockefeller moved to Cleveland, Ohio, with his family and at the age of sixteen in September 1855, he got his first job as an assistant bookkeeper for a small produce commission firm, Hewitt & Tuttle for 50 cents a day. Rockefeller would work very hard and was adept at calculating transportation costs. In 1859, he, with a partner, Maurice B. Clark, he raised $4,000 in capital and established his first enterprise —a commission business dealing in hay, grain, meats, as well as some other goods. He started growing steadily and in 1863, he built his first oil refinery, near Cleveland. In 1862, it became the largest refinery in that area, after which Rockefeller dedicated his time to the oil business.

Rockefeller was the first entrepreneur in human history who crossed billion dollar mark and also regarded as the richest person in human history. He was the pioneering figure in the petroleum industry and laid the foundation of modern industries in the United States of America. Moreover, Rockefeller took strong interest in several philanthropic works and donated millions of dollars in the areas of medicine, education, and scientific research especially in the annihilation of hookworm and yellow fever. Rockefeller was the founding father of the University of Chicago, and Rockefeller University.

He founded the philanthropic organization General Education Board in 1902 and donated $180 million with the intention of improving higher education system and supporting medical schools across the United States, and developing the rural black and white schools and agricultural practices in the South. In 1913, he founded the Rockefeller Foundation and gave approximately $250 million to the foundation in support of public health, medical training, as well as arts. Throughout his life, Rockefeller remained a teetotaler and kept himself away from alcohol and tobacco. He dedicated almost three decades of his life in philanthropic activities.

According to an estimate, Rockefeller donated over $600 million in his lifetime, which is more than $250 billion in today’s currency. According to List of wealthiest historical figures, based on information from Forbes 2008, his net worth was $663.4 billion as per the value of US dollar in 2007.

In 1937, Rockefeller died of arteriosclerosis at the Casements, in his home in Ormond Beach, Florida.

“I believe in the dignity of labor, whether with head or hand; that the world owes no man a living but that it owes every man an opportunity to make a living.”

“Every right implies a responsibility; Every opportunity, an obligation, Every possession, a duty.”

“I know of nothing more despicable and pathetic than a man who devotes all the hours of the waking day to the making of money for money’s sake.”

“Singleness of purpose is one of the chief essentials for success in life, no matter what may be one’s aim.”