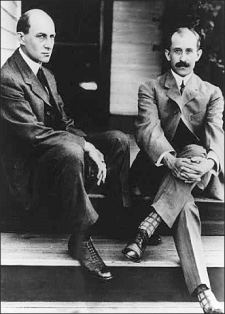 In 1892, they suffered depression and fought the battle against family illness to start the bicycle shop, which led them to experimenting with the prototypes of flight. In 1896, they made aerial experiments with kites and gliders and after four years’ rigorous experiments, they made first trip to Kitty Hawk, N.C., for experimental flights in 1900. In 1903, they successfully created flight in a motor-powered airplane and in 1905, they finally created a plane that could stay in air for at least half an hour. In 1908, Wilbur made more than 100 flights near Le Mans, France and after some time made his longest one on Dec. 31st that lasted for 2 hours, 19 minutes. In 1909, they completed airplane tests for the War Department.

After abundant experiments, years of hard work, masses of failed prototypes, they finally thrashed all troubles and succeeded creating flying machine or could be called a plane that could fly for more than half an hour. “I am an enthusiast, but not a crank in the sense that I have some pet theories as to the proper construction of a flying machine. I wish to avail myself of all that is already known and then, if possible, add my mite to help on the future worker who will attain final success.” Wilbur Wright

Their unfailing intellect, composed temper, great autonomy, perseverance and never give-up attitude did not let them down. They fulfilled the dreams of our ancestors who would dream of flying.

“The desire to fly is an idea handed down to us by our ancestors who, in their grueling travels across trackless lands in prehistoric times, looked enviously on the birds soaring freely through space, at full speed, above all obstacles, on the infinite highway of the air.” Orville Wright

“We were lucky enough to grow up in an environment where there was always much encouragement to children to pursue intellectual interests; to investigate what ever aroused curiosity.” Orville Wright

“More than anything else the sensation is one of perfect peace mingled with an excitement that strains every nerve to the utmost, if you can conceive of such a combination.” Wilbur Wright