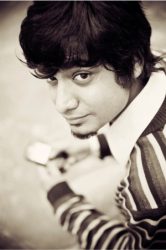 “Stop Thinking and Start Doing”
Varun doesn’t believe in spending too much time on seeking out the secrets to success. He believes that success is the result of taking timely decisions, hard work, learning from failure, and shifting focus from thinking to doing.

26-year-old entrepreneur, film maker and author Varun Agarwal envisioned a lot but accomplished nothing until he stopped thinking and started doing what he wanted to and that’s what he cleared about himself at INK talks. He co-founded Alma Mater (a company that manufactures customized sweatshirts to alumni), a social media marketing firm Reticular, and a film production house Last Minute Films. Besides, he is also the author of a book ‘How I Braved Anu Aunty and Co-Founded A Million Dollar Company’. His pursuit of interests took his way to work with one of the greatest composers A.R. Rahman, famous actress Preity Zinta, and some other big names.

1. Do what you love doing; don’t look too far ahead
Do what you truly desire to do and make business happen. You can justify your doorway into a specific business niche (which was literally forcefully imposed upon you by your family or acquaintances) by pretending to be an indulgent successful figure but ultimately you will be a mere latent power and possibility. On realization, it brings a miserable fortune.

Studying engineering was never his decision and as the consequences he failed. When he started following his instinct, he ended up establishing a multi-million dollar company. Don’t let anybody affect and limit your creativity and efficiency.

2. Show your sincerity to whatever you do

Before delving into any business venture, hold authenticity and sincerity as your very first principles, the leading part of selling anything. Leadership is self-made and self-instilled that come on the surface shinning through your truthfulness, sincerity and earnestness.
Note: Don’t listen to the people talking rubbish about sincerity because that is what threatens their horrid constitution they’re preserving in their business values.

3. Don’t think much; otherwise someone else will accomplish before you

Thinking is the source of insight that shape your lifetime but excessive thinking and anticipation is the enemy of creativity. The amount of energy you are imposing on your ‘futile ‘ifs’ and ‘thinkings’ will make your life inadequate and strenuous; instead, think on ‘how’s’, act and discover the equipment to fly over your destination and land before others.

4. If it doesn’t sell then it isn’t the business

If it doesn’t sell then sorry it isn’t the business. Sale is more about the approach of the salesman rather than the attitude of the prospect. If you have hard time selling, deal with it bravely, patiently and cheerfully. Remember, everybody survives by selling something (whatever it is).

Note: Have a graceful persuasion (instead of manipulation or exploitation) to captivate an earnest listener, subdue their understanding, engage them throughout your presentation and watch the result enhancing…

5. Aim high regardless of what people say about it

Aim for unaccomplishable and impossible. Your self-endowments (conviction in your visions, perseverance in attitude and consistency and patience in the task in hand) are the determining factors of how competent you are to reach for the farthest thing.

Note: Think big to be big; don’t look backwards or forwards but upward to reach it.

6. There is no single goal for entrepreneurs, they have endless

Leaders’ glory lies in the triumph of reaching goal, one after another. Have goals and stare up the stairs to reach on top.

Note: There should be one determined goal that is to set up goals one after another and accomplish them with persistence.

It is basically the destructive fear of failure that prevents you from realizing your desires and dreams of success. Fear is what you think with your closed eyes; open it and it will cease you to amaze how infinite your power is to accomplish whatever you think and beyond it.

Note: Whenever fear of failure overwhelms you, think of your last failure. What was the worst thing that happened to you after it. Did a anyone swallow you? Were you vanished for some time or died miserable? …Of course not! Then what is it that you fear?