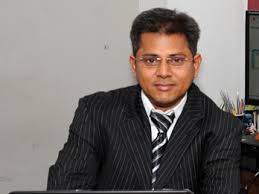 Staying focused on your goals can be very difficult at times and so is sticking up for yourself and your dreams. Trivial indulgence in hesitance or doubt in your own ability is the loss of tomorrow. Determination and intense ambition have always been the achievers’ choice and Sudheer Nair, who once belonged to a lower middle-class family, is one of the most inspiring rags to riches stories.
Sudheer Nair, the first generation entrepreneur, founder and CEO of Eresource Infotech, found out his best self in adversity through determination, consistency and strong will-power that has helped him lead a Rs 8.1 crore ERP firm today. At the age of 16, after sudden demise of his father he dropped out his studies and shouldered family’s financial responsibility. Initially he did several odd jobs including working as a helper in loading and unloading cargo at Sahar Cargo Complex, Mumbai. He was introduced to the typewriting for some required documentation, which he did with great enthusiasm and soon mastered over it. Soon he switched the job of typing programs for a computer programmer with no prior knowledge of programming. In course of typing programs he became an expert computer programmer. Soon he started devoting his time on software development and understanding its application. In 1990, he got his first job as programmer in a popular afternoon daily Afternoon DC. Later when he experienced ERP system was emerging, he joined JD Edwards in London as a consultant.

In 2006 he founded eresource Infotech Pvt Ltd, with some extremely skilled and enthusiastic professionals. In 8 years, he has made his company to be a leading web-based ERP solution provider.